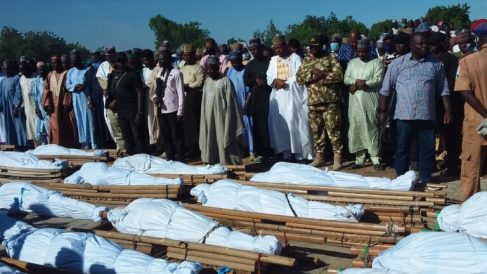 The Shekau-led Boko Haram on Tuesday in footage also claimed responsibility for an attack that killed 22 farmers last month.

The infamous group said the attacks were a retaliation on farmers for arresting its members and handing them over to the Nigerian military.

Shekau’s claim collaborates Hamidu Bala, a resident of Zabarmari and a member of Rapid Response Squad, a Borno government-established task force against banditry, who said a group of farmers on Friday disarmed a lone Boko Haram member and handed him over to the local security operatives.

“That action was what may have prompted reprisal from the insurgents,” Bala said.

Dozens of mourners surrounded about 43 bodies, which were wrapped in white burial shrouds and placed on wooden pallets, as they were buried on Sunday.

One resident and Amnesty International said 10 women have gone missing since the attack.

United Nations humanitarian coordinator Edward Kallon said he was “outraged and horrified” by “the most violent direct attack” against civilians this year.

According to Humangle, the operatives of the Civilian Joint Task Force (CJTF) on Monday recovered at least 35 more decomposing bodies in the area.

The newly discovered victims were buried at the spot because the search team was unable to move the badly decapitated and decomposing bodies, Humangle reported.

“In one side, they stay at home they may be killed by hunger and starvation; on the other, they go out to their farmlands and risk getting killed by the insurgents,” he said.

But a presidential spokesman Garba Shehu said the farmers did not get a military clearance before resuming farming activities in the area.

Shehu who spoke to BBC ‘Newsday’ said the government was sad about the tragic incident, but added that the “people need to understand what it is like in the Lake Chad Basin area.”

“The truth has to be said. Was there any military clearance from the military who are in total control of the area?” Shehu queried. “Did anybody ask to resume activity?”

He added that he had been briefed by military authorities that the villagers did not seek military advice before exposing themselves to “a window that the terrorists have exploited.