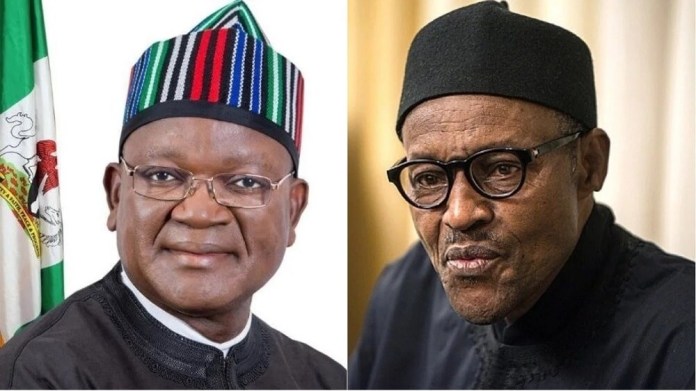 Benue State Governor, Samuel Ortom, has described as ‘evil’ the re-introduction of Water Resources Bill at the National Assembly

The controversial Water Resources Bill was last Wednesday reintroduced to the House of Representatives by the Chairman of House Committee on Water Resources, Sada Soli.

The bill which was introduced in the 8th Assembly caused stir as many Nigerians opposed it for fear of taken over land by Federal Government.

While Nigerians thought that nothing again would be heard about the bill, it was introduced as an Executive Bill and passed in 2020.

But Ortom who was one of those that kicked against it in 2020 on Saturday described the bill as an ‘evil’ plan to grab land’.

Speaking at the flag-off of the distribution of seedlings in Makurdi, the governor decried the agenda of the Federal Government to seize land from the 36 states of the federation.

Ortom said categorically that Benue will not surrender its land in whatever guise to the Federal Government.

“Let me say emphatically that there will be no Water Resources Bill in Benue State; we will resist it, if other states encourage it, here in Benue we will not accept it.

“The other time they brought water resources bill we said no, now they are bringing the evil bill again, it is evil plan to take over waterways.’’

use Act is clear about this that land belongs to people and it is entrusted to the state governor and I promise that no one will come to Benue to seize our land.