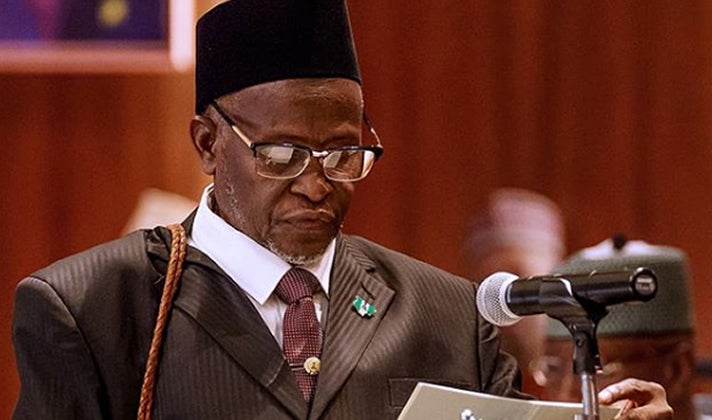 Civil rights advocacy group, Human Rights Writers Association of Nigeria, has stated that the resignation of Justice Tanko Muhammad as the Chief Justice of Nigeria (CJN) is not enough, as it calls for Muhammad’s arrest.

Muhammad’s resignation as the 17th Chief Justice of Nigeria was made public on Monday.

It is pertinent to note that Muhammad’s resignation followed quickly on the heels of the allegations of mismanagement of funds levelled against him by 14 justices of the Supreme Court.

That the justices of the apex court, in a joint petition, accused the Bauchi State-born CJN of poor welfare, among other ill-treatment being meted out to them.

HURIWA had earlier called on the National Judicial Council and the Code of Conduct Tribunal to probe the corruption allegations levelled against Muhammad.

In its recent reaction to the resignation, the group called for the arrest of Muhammad by the Economic Financial Crimes Commission and the Independent Corrupt Practices and Other Related Offences Commission.

A statement signed by the group’s National Coordinator, Comrade Emmanuel Onwubiko, read, “The resignation of Justice Tanko Muhammad as the Chief Justice of Nigeria is not enough; the EFCC and the ICPC must swing into action, investigate then if a cause if Acton is ascertained, then arrest and prosecute him over the corruption allegations levelled against him by the 14 justices of the Supreme Court if a prima facie evidence exists .

“Justice Tanko must be prosecuted just as his predecessor, Walter Onnoghen, who was probed and later removed on a controversial note following some allegations against him which were probed by both the NJC and the CCT.

“The investigation and probable prosecution of Tanko, if indicted, will set a precedent that Buhari’s anti-corruption crusade is not a joke unless it is a joke. Tanko’s prosecution if found culpable of those sets of allegations will also serve as deterrent for any proven corrupt justices that the judiciary won’t be a haven for scoundrels.”