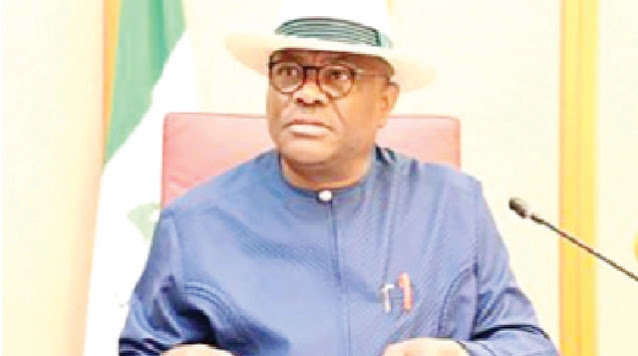 Rivers State Governor, Nyesom Wike, and the state Commissioner of Police, Friday Eboka, on Saturday ordered an investigation into the stampede that led to the death of 31 persons, including children, at the Port Harcourt Polo Club in the state capital.

The incident happened at the venue of an outreach organised by the Kings Church Assembly, on Saturday morning. The programme, tagged, ‘Shop for free’, was organised to distribute foods and other items to people for free.

The governor, in a statement by his media aide, Kelvin Ebiri, expressed sadness over the loss of lives, saying the state government would set up a probe panel to investigate the incident.

The statement titled, ‘Wike mourns victims of Polo Club stampede,’ added, “On behalf of the government and people of Rivers State, I pray to God to grant the bereaved families the fortitude to bear the loss of their loved ones. The governor said the Rivers State Government will constitute a probe panel to investigate the incident and details of what transpired.”

Also, the police in a statement by its acting spokesperson, Grace Iringe-Koko, said the church programme attracted a mammoth crowd, which became tumultuous and uncontrollable.

The statement added, “Unfortunately, all efforts made by the organisers to restore sanity proved abortive, hence, the stampede. Persons that were injured were swiftly evacuated to the hospital for immediate medical treatment. Unfortunately, a total of 31 persons lost their lives in the stampede.”

Iringe-Koko noted, however, that normalcy had been restored in the area.

It added, “The Commissioner of Police, Eboka Friday, while condemning the incident, directed the Deputy Commissioner of Police in charge of the State Criminal Investigations Department to carry out a discrete investigation into the incident. He further called on religious and charity organisations to ensure that they work with the police for security and crowd management during their programmes. The CP commiserates with the bereaved families and prays to God to comfort and grant them the fortitude to bear the loss.”

Our correspondent gathered that the church had invited members of the public to the venue for its annual programme where it distributes food items to individuals.

Church members, residents and other interested individuals were said to have besieged the venue as early as 3am to secure seats. But on getting there, the venue was under lock and key, as the crowd continued to surge.

It was also gathered that the police took some members of the church to an undisclosed location.

An eyewitness, Mr Ita Okon, who lives close to the venue of the incident, said he was asleep when he started hearing noise around 3am on Saturday. He added, “The noise woke me up. When I came out, I saw a crowd and I asked questions. The crowd was too much as of 3am. The stampede happened around 6am.

“The gate was shut but people forced it open. Those at the back were saying the gate had been opened, let us go inside. As they trooped in, people fell on one another, causing the stampede. At the time it happened, they hadn’t even started sharing the food items. Even the programme had yet to start.”

Okon blamed the incident on the level of poverty and hunger in the country, saying it was the only reason why people came early to secure a place.

He added, “One woman rushed out with her child already dead. I learnt that 30 persons died, but later we heard the number had risen to 53. People laid on the ground as if they were sleeping. From where I stood, I saw a man pressed to the gate on account of people stepping on him. He was shouting help, help, but he later died.”

It was learnt that the remains of the deceased were taken to the morgue of the Military Hospital along Aba Road in Port Harcourt, while scores of injured victims were receiving treatment at the emergency unit of the hospital.

I lost my five-year-old son – Father

Meanwhile, Samuel Orji-Eke, the father of a five-year-old boy who lost his life in the stampede, blamed the incident on lack of crowd control by the church, even as he called on security operatives to ensure justice for his son.

He said, “Around 6.30am, I attended the church programme with my three children. I held my son, carried my six-months-old daughter in my arms and my wife held the other one. At a point, the entire road was blocked. They opened the gate and people rushed in and they began to fall on one another.

“That was how they marched on me, broke my arm and my son slipped off and he was lost in the stampede. When I found him, he was still alive, but there was no help or first aid. I am demanding justice. There were no logistics in place. For now, we have not heard from the church.”

He affirmed that initially there was no police presence but only ushers until when the incident happened.

A woman, who gave her name as Adamma Justice, raised the alarm over the disappearance of her daughter, saying she attended the event with two of her children.

Fighting back tears, she said, “I’m looking for my 11-year-old daughter. I came with two other kids. Kings Assembly invited us to come because last year we came and they gave us foodstuffs. So, we came this year. We were many at the gate, and I was not able to carry the three of them. So, I hung one on the fence, carried the small one on the back, and the 11-year-old was in the crowd. They were pushing her and that was how I lost sight of her.”

Our correspondent traced the family of one of the deceased to Elekahia in Port Harcourt. The family members said she had been buried, as sympathisers gathered at her father’s compound on Ibe Street.

A security expert and public affairs analyst, Bayo Ojo, described the incident as unfortunate, saying the church should have made provisions for crowd control.

He added, “Due to the poor state of our economy, when you want to introduce something like that, you should know that it will attract a lot of people, even from the suburbs. Therefore, there was the need to tighten security in the area.”

He said some miscreants could also have infiltrated the crowd to cause mayhem.

Meanwhile, the All Progressives Congress in Rivers State, in a statement by its spokesperson, Chris Finebone, said it was saddened by the incident.

It partly read, “While we appreciate churches and other voluntary organisations that strive to fill in the gap that exist in the living conditions of the poor in the society, we make bold to insist that such organisations should embed safety considerations into whatever they do.”

Meanwhile, the President Muhammadu Buhari has expressed sadness over the incident.

Buhari, in a statement on Saturday by his Senior Special Assistant on Media and Publicity, Garba Shehu, titled, ‘President Buhari deeply saddened by deaths in Port Harcourt stampede’, advised organisers of such big events to plan well to avert similar calamitous deaths and injuries.

He, therefore, directed that “all efforts should be made to provide relief to those injured in the unfortunate incident,” and that disaster and relief agencies of the Federal Government should maintain constant contact with the Rivers State Government to ensure that good care was taken of the relief efforts. ,,