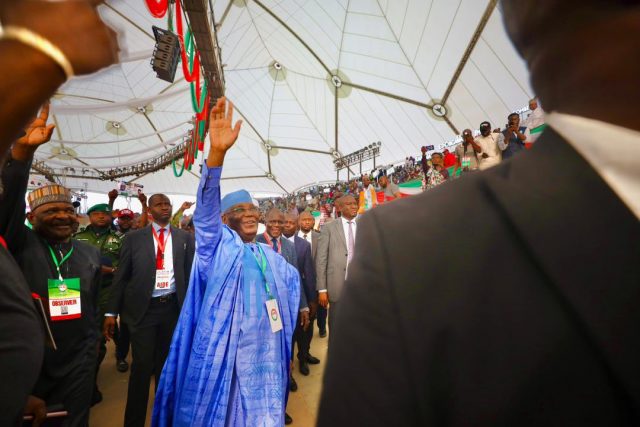 Another former Senate President, Anyim Pius Anyim, who polled 14 votes, was followed by the only female aspirant in the race, Tariela Oliva and Sam Ohuabunwa who polled one vote each. A total of 12 votes were voided after the counting.

Of the 12 aspirants who participated in the election, four got no votes. They are former Ekiti state Governor, Ayo Fayose; Charles Ugwu; Dele Momodu and Chikwendu Kalu.

In an acceptance speech after his victory, Atiku declared that it was another milestone in the effort to consolidate on the gains of democracy. “Today, we are making another history. The history, which we believe will bring about fundamental changes in governance and also in our political processes. Today, we have witnessed another one of the freest elections to be conducted by our great party.”

He lamented that the APC had destroyed all the gains recorded by the PDP administration. “I pledge to confront our economic challenges, which were all caused by the APC government. The PDP made Nigeria one of the most prosperous countries, if not the most prosperous country in the continent of Africa. We implemented economic reforms that brought about jobs and prosperity in this country. The APC came and wiped off all those gains. Ladies and gentlemen, this is why I said today is a very historic day because it is going to give us an opportunity to reverse all the misgovernance of the APC government,” Atiku said.

He assured other aspirants of his readiness to work as a team player in the task of rebuilding Nigeria and pledged to restore national unity if elected as President. He pleaded that all aggrieved members should resort to the internal mechanisms in resolving issues instead of going to court.

Earlier, in what was a major highlight on the day, Sokoto state governor, Aminu Waziri Tambuwal, withdrew from the presidential race and urged his supporters to vote for Atiku.

Tambuwal, who was Atiku’s most serious challenger in the 2019 PDP presidential primary election, told a bewildered crowd of delegates, leaders and supporters at the venue that his decision arose from his belief that the PDP needed to be united to rescue Nigeria from the shackles of poverty, insecurity.

His announcement threw delegates into a frenzy. And when he mounted the podium, Tambuwal sang the gospel of unity for the party to rebuild Nigeria. He revealed that his wide consultation with leaders across the country had made him to believe that there was need for sacrifice among leaders.

In what seemed like a prophetic statement while addressing the delegates earlier, former Vice President Atiku Abubakar said, “this is the last convention in the era of APC.”

Calling on the party members to unite no matter the provocation, sabotage and discrimination, Atiku said, “the most important thing for us is to unite to make sure our party wins election.”

In his welcome address, the Chairman, 2022 PDP National Convention Organizing Committee (NCOC), David Mark said that the party national convention is the first step in rescuing the nation.

Mark, who assured that the exercise will be transparent, credible, fair and just to all, added that whoever emerges from the convention will be the choice of the party and will ultimately win the presidential election for the PDP in 2023.

Lamenting the situation in the country, Mark said “our students are at home for over three months on account of Academic Staff Union of Universities (ASUU) strike for failure of government to address issues affecting the education sector.

“Fellow country men and women are today in captivity with kidnappers and our government looking overwhelmed and unable to rescue them. Sadly, the APC government has mortgaged the future of Nigerians by ceaseless borrowings with nothing tangible to show. Nigeria is now the poverty capital of the world.

“The intractable insecurity situation, rising unemployment, poverty, ineptitude and corruption, and above all the poor management of our diversity have become the hallmark of the APC administration. These have made living in Nigeria worthless.

“Today’s convention is beyond the ordinary; it is a call to salvage Nigeria from the brinks. Nigeria has had chequered socio-economic and political problems but never has it descended so low.

Meanwhile, one of the presidential aspirants in the ruling All Progressives Congress (APC), Asiwaju Bola Ahmed Tinubu has congratulated Atiku on his emergence as the candidate of PDP and other contestants for the peaceful manner they conducted themselves.

Tinubu expressed the hope that Atiku would be his worthy opponent by the grace of God and with the support of APC delegates in next year’s presidential election.