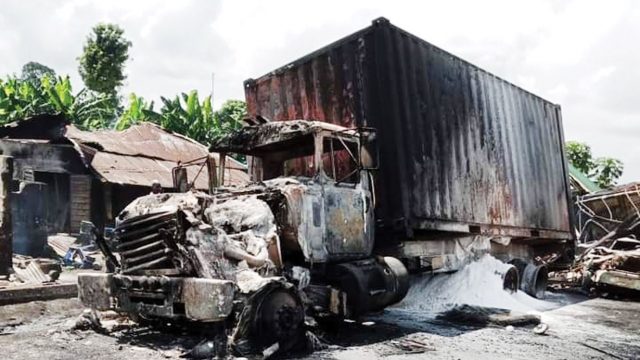 A truck affected by the tanker explosion.

At least two people lost their lives, yesterday, in a petrol tanker explosion at Omurelu community in Ikwerre Local Government Council of Rivers State. Several buildings and other properties were razed in the incident, which took place in the early hours of Tuesday. An eyewitness told newsmen that the tanker carrying petroleum products made a stop-over at a checkpoint to attend to the petroleum Task force team when another tanker trailing it, tried to maneuver and scratched the tanker which, ignited the fire.

A source identified as Innocent Amadi, said: “Early hours of today, fire was ignited after two tankers collided, leading to the fire engulfing buildings and two people lost their lives.” He said angry youths of the community have lamented activities of the Task Force on the road and are calling on government to intervene to save life and property. Public Relations Officer of the State Police Command, SP Nnamdi Omoni, who confirmed the development, said he was not sure of the casualty figures, but added that the Commissioner of Police, Friday Eboka, has ordered investigation into the incident.