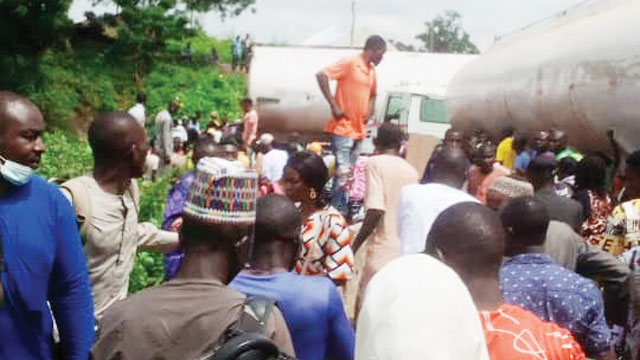 The road was re-opened on Monday about 5:30p.m., to allow free flow of movement by travellers who were trapped for days on the road.

Their excitement followed their ugly experience on the road since, it was blocked on Saturday by tanker drivers over its deplorable state, and the state government’s barring heavy duty vehicles from using Bida- Minna road.

Spokesman for the Petroleum Tanker Driver Association, Alhassan Salihu, had demanded opening of Bida- Minna road by Niger State Government as, the only condition to end the road block.

The disagreement left motorists and commuters plying Minna-Abuja road stranded, especially, Abuja -based civil servants, who had official engagements such as seminar and workshop in Niger State.

Many had to make u- turn halfway, while cancellation of trips also affected economic and social opportunities in the state capital, particularly spending by visitors from Abuja.

Speaking on their four-day experiences, excited commuters, said the days of blockade were nightmarish, as motorcyclists, who took advantage of the situation, hiked their fares.

One of them, identified as Abdullahi said plying Lambata to Ezom, a journey of less than three kilometres, attracted N1,000,as against N50, while Lambata to Suleja cost N3,000 as against N200 charged by commercial buses before the blockade.

Some road users, who spoke to The Guardian expressed dismay over the attitude of Nigerians, who took laws into their hands without being punished by the authorities.

one of them, Mr. Isah Ahmed, who was trapped on Lambata road during the blockade, said as at the time he travelled out of Minna to Abuja in the early hours of last Friday, Lambata road was still free, but met an entire blocked road on Saturday on his way back.

Stressing that it was three days of unforgettable experience, he called on the federal government to do the needful by fixing roads to protect life and property of citizens.

Another traveller, Ahmed Shehu lamented that the action of the truck drivers has caused monumental damage to livelihood of citizenry, as goods and animals worth several millions were destroyed as a result of the blockade. He urged relevant authorities to check activities of truck drivers with a view to punish anyone found wanting.

But, the Secretary to the Niger State Government, Ibrahim Matane, in a statement, warned that the state government would not take liability for damage vehicles or goods as a result of any unfortunate incident that may arise in the event of any tanker carrying petrol exploding and spilling the products within the communities.