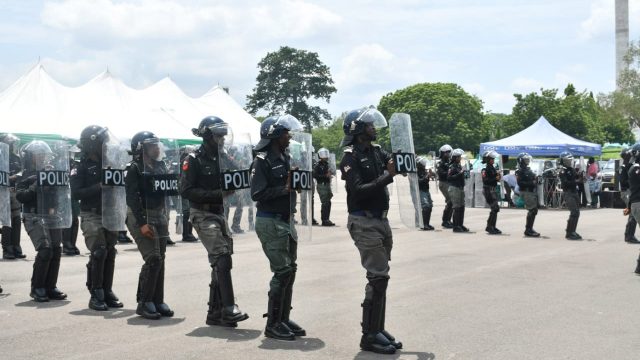 Also, paraded was one Ayodeji Ojo, who allegedly waylaid a lady, while trekking along Federal Housing Road, Ado- Ekiti and had a carnal knowledge of her. Briefing newsmen at the parade, the police spokesman, ASP Abutu Sunday, said based on the information received, operatives swing into action and arrested the suspect after he defiled the three- year old minor.

According to him, police investigation revealed that the suspect lured the victim into his room, where he had carnal knowledge of her. “The victim was thereafter taken to the hospital for medical examination and treatment. The expert opinion proved that there was penetration into the victims’ virgina.” On the role played by the grandmother of the victim to prevent the case from being heard, Abutu, said: “When the grandmother of the victim heard about the incident, she demanded the sum of N50,000 from the parents of the suspect for amicable settlement of the case. “The said money was paid to her and she converted it to her personal use. She was also arrested and shall be charged to court alongside the suspect for compounding felony and defilement respectively.”

Also, Abutu said the command arrested two suspected robbers including one Ogunkuade Agboola and Ajayi Tunde on September 22 for robbing a provision shop belonging to one Opeyemi Stella at Oke-Aga street, Igede-Ekiti. According to him, items recovered from the suspects included six bags of rice valued at N180,000, half bag of beans valued at N30,000 four kegs of 25litres of vegetable oil valued at N102,000, four big tin tomatoes valued at N14,000, three plates of crown milk valued at N15,000, four cartons of indomie noodles valued at N12,000 and one bag of Golden Penny flour valued at N30,000. He said the two arrested suspects confessed to the crime and that part of the stolen items were recovered as they have already sold some to a buyer who is currently on the run. The police also paraded three suspected cultists, including one Aladesanmi Sehinde (41), Aladesanmi Tunbosun, (31) and Ajayi Oluwaseun (31), following a clash between the proscribed Supreme Eiye confraternity and the Black Axe ‘Aiye confraternity in Ikere-Ekiti.