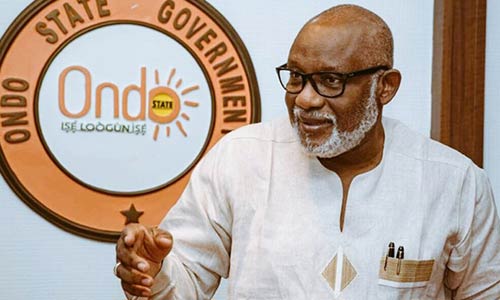 The Ondo State Governor, Mr Rotimi Akeredolu, has called on the Federal Government to look into the establishment of the deep sea port in the state.

Akeredolu stated that the proposed seaport would go a long way to decongest the Apapa Port in Lagos State.

The governor made the call on Tuesday in Akure, the state capital, at the South-West Export Enlightenment and Engagement Forum.

According to him, the state was strategically positioned to move goods to the South-East, South-South, North-West and North-Central.

He said , “Everything going to South-East or South-South and the North must pass through Ondo State. All these activities will make us to advise the Federal Government on the importance of Port Ondo.

“Apapa will be decongested. We can boast of the deepest draught in West Africa. We are ready and we have done our work and people have shown interest,” the governor said.

He added, “The airport in Akure is so busy now, but it is not serving the purpose for which it was established. The Akure airport was established as a cargo airport. We have said it should have a refrigerated area where people can refrigerate their goods before exporting them.”