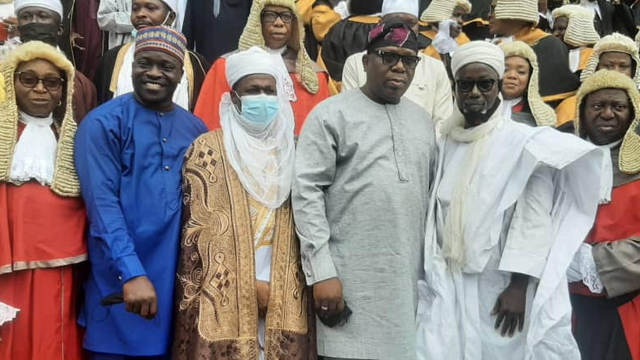 Lagos State Governor, Babajide Sanwo-Olu, has reiterated his continuous co-operation and support for the state judiciary to ensure improved access to justice by all residents irrespective of social and economic status.

The governor disclosed this in his goodwill message delivered at the Lagos Central Mosque to mark the commencement of the 2021/2022 Legal Year.

He said in spite of the challenges, especially the mindless destruction and vandalisation of Igbosere High Court, the oldest court building in Nigeria, the judicial system had continued to function effectively and efficiently.

He commended the state Chief Judge, Justice Kazeem Alogba and the entire members of the judiciary, for the success recorded in the last legal year in spite of challenges posed by the COVID-19 pandemic and the aftermath of the #EndSARS protest, which was hijacked by hoodlums to wreak havoc on public and private assets.

The governor, who was represented by the Commissioner for Home Affairs, Olanrewaju Elegushi, gave the assurance that his administration remained committed to the ongoing reconstruction of Igbosere High Court and renovation of other courts, including the digitisation project aimed at enhancing speedy dispensation of justice.

Besides, an Associate Professor of Islamic Studies, Lagos State University (LASU), Ustadh Kabir Paramole, who spoke on the topic, “Essence of Effective Administration of Justice in Nigeria,” at the Central Mosque, Lagos, said that it would be difficult for the country to move forward without Justice.

He admonished judges to have the fear of Allah and deliver justice with fairness.

However, Justice Kazeem Alogba, in his address, assured the people improved performance in the new legal year.

Special Adviser to the Governor on Works and Infrastructure, Mrs. Aramide Adeyoye, disclosed this during the inspection of the Lekki regional road project.

Adeyoye, in a statement made available to The Guardian, yesterday, said the project was a precursor to the proposed Fourth Mainland Bridge construction that will begin in the first quarter of next year.

She said the project would further open up the Lekki area to serve as an alternative route and link to several communities and industrial areas.

She added that the governor was committed to massive infrastructure delivery.Sanwo-Olu pledges transformation of judicial sector