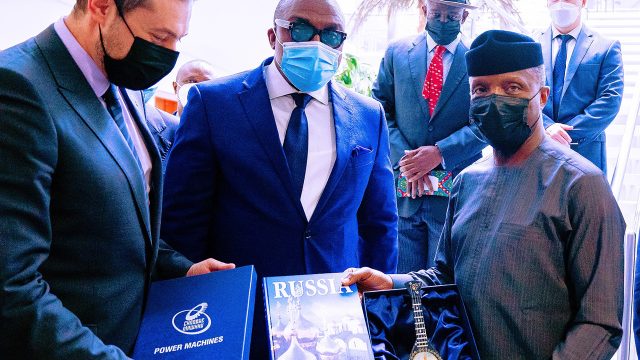 They gave the indication, yesterday, at The Dome in Abuja ahead of the inauguration of the Nigeria-Russia Chamber of Commerce and Industry (NRCCI) today.

President of NRCCI, Obiora Okonkwo, who addressed a world press conference, flanked by his Russian counterpart, said the investors have the backing of the Russian Federation.

Mr. Andrei Albeshchenko, Ambassador at Large and head of the Association of Economic Cooperation with African States, led the Russian delegation.

The delegation disclosed that the current trade volume between Nigeria and Russia is over $600 million.

Okonkwo told newsmen: “Our aim is to study, promote, protect and extend industrial and commercial relations between individuals, firms, companies, corporations, institutions and associations of Nigeria and Russia, as well as provide Nigerian and Russian businesses with a forum for contacts, discussion of common interest, information, advice and collation of ideas for the improvement of economic and business interests.”

Meanwhile, Vice President Yemi Osinbajo has declared that the formal inauguration of the NRCCI will deepen the long-lasting relationships and invigorate business opportunities.

Osinbajo spoke when he received a delegation of the NRCCI, led by Okonkwo at the Presidential Villa, Abuja.

The delegation included a special envoy of the Ministry of Foreign Affairs of the Russian Federation, Mr. Oleg Ozerov, and the country’s Ambassador to Nigeria, Mr. Alexey Shebarshim.

He said: “After a very extensive period of collaboration between our countries, frankly, I was quite surprised that we don’t already have a Nigeria-Russia Chamber of Commerce and Industry. I assumed that such a body already existed. It is never too late to do a good thing. This is an auspicious time to do so, especially given all of the economic opportunities before us.”

Referring to a previous meeting of African leaders and Russian business executives in 2019, Osinbajo noted that the interaction “was an excellent introduction to serious business for African countries with Russia and our Heads of State who attended obviously felt this was a unique opportunity to do more serious business with Russia.”

He added: “There have been very many economic and social engagements, especially in education. I think also that there have been several economic relationships that have blossomed for a while and several other businesses and commercial opportunities that are opening up here and there.

“But I think there is a need to formalise and to have a channel such as the Chamber of Commerce and Industry. There is a need for that to happen so that we are better able to build upon what has taken place in the years gone by.”