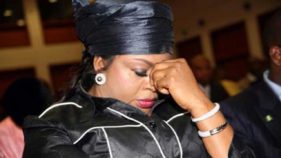 DESPITE her defection to the All Progressives Congress, the Economic and Financial Crimes Commission has said the senator representing Anambra North in the Senate, Stella Oduah will be arraigned on eight-count of conspiracy, money laundering and maintaining anonymous bank accounts with First Bank Plc at the Federal High Court, Abuja, on October 19, 2021.

The EFCC explained that she would be arraigned alongside a Nigerian subsidiary of China Civil Engineering Construction Corporation, CCECC Nigeria Limited; and Gloria Odita, who was her aide when she was the Minister of Aviation and company secretary of Sea Petroleum & Gas Company Limited, a firm founded by the former minister.

The EFCC had indicted Oduah and CCECC in alleged fraudulent cash transactions of about N5bn in 2014 while she was the aviation minister.

She was removed as a minister by then President Goodluck Jonathan on February 12, 2014, following a scandal over N255m armoured cars purchased for her by the Nigeria Civil Aviation Authority at inflated prices.

Oduah had missed the last court sitting on July 12, prompting the presiding judge, Inyang Ekwo to threaten her with a bench warrant.

The senator had on August 26 dumped the Peoples Democratic Party for the All Progressives Congress “to be part of the process of changing the political narrative in the South -East.”

She joined a long list of politicians who decamped to the ruling party while facing corruption trial.

They include the Ebonyi State Governor, Dave Umahi, who is under EFCC investigation for alleged N400m arms fraud; the Minister of Niger Delta Affairs, Senator Godswill Akpabio, who defected from the PDP to the APC in 2018 while under investigation for allegedly diverting about N100bn while he was the governor of Akwa Ibom State between 2007 and 2015.

The anti-graft agency had said no fewer than 32 witnesses had been prepared against Oduah and her co-defendants.

The EFCC spokesman, Wilson Uwujaren, confirmed on Monday that Oduah would be arraigned on October 19.