Endless wait for prosecution of terrorists, their financial sponsors
Bolaji Ogungbemi
September 28, 2021
9:59 am 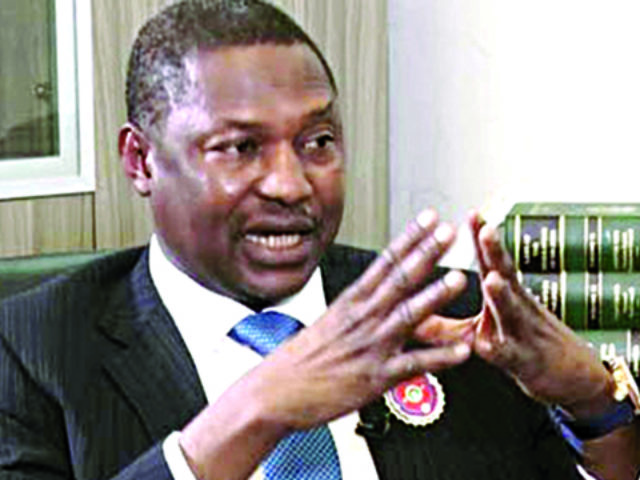 The war against terror has lasted for 12 years, and so is the bid to prosecute those arrested for either terrorism or sponsoring it. Sensing that citizens were getting impatient, the federal government last year announced that it would soon begin the prosecution of the terrorists.

A Deputy Director at the Federal Ministry of Justice in Abuja, Chioma Onuegbu had stated that about 800 suspects linked to the Islamic terrorist group, Boko Haram, had been prepared for prosecution, which will start as soon as the strike embarked upon by the judiciary workers was over.

According to Onuegbu, the 800 are among about 1,000 terrorism suspects whose case files have been analysed by the prosecutors handling the Federal Ministry of Justice’s “complex case group”, which she heads. She explained that out of 1,000 case files that were reviewed, 800 of them have prima facie evidence to proceed to trial, while 170 have been recommended for release due to lack of evidence. She added that of the 800 case files with prima facie evidence, 280 of them had been filed in court, awaiting commencement of trial.

She said: “Out of the 1000 files, after our vetting and legal advice, we found that over 800 of them had prima facie evidence to proceed to prosecution and charges have long been drafted in respect of those 800. 280 of those cases have also been filed at the Federal High Court and the charges served on the Legal Aid Council of Nigeria (LACON), who is defending the suspected terrorists. The rest of the cases found to have prima facie evidence are to be filed at the Federal High Court when the courts resume from the ongoing judiciary workers’ strike that is now about seven weeks old.”

But when that did not happen over a period of time, after the strike was called off, a human rights lawyer, Mr. Femi Falana (SAN), wrote a letter to the Attorney-General of the Federation (AGF), Abubakar Malami (SAN), demanding an update on the suspects. His Freedom of Information Act request titled, ‘Request for Information on Prosecution of Arrested 800 Boko Haram Suspects,’ was signed by Sam Ogala on behalf of Falana and Falana chambers on August 5, 2021.

The statement reads in part: “In April 2021, the governors expressed their reservations over the delay in the trial of the terror suspects, demanding for a prosecutorial power from the AGF to enable their respective state governments to prosecute the detained Boko Haram suspects. The request was also rejected.

“However, by May 2021, the office of the Attorney General of the Federation was widely reported in the print and electronic media to the effect that the Federal Government had concluded arrangements to prosecute about 800 suspects linked to the Islamic terrorist group, Boko Haram, as soon as the industrial action embarked upon by the Judiciary Staff Union of Nigeria was called off.

“In the light of the above, we request that our law firm be furnished with information with respect to when these Boko Haram suspects would be arraigned in court, since the strike by JUSUN has since been called off.”

Speaking to The Guardian on the outcome of his letter, Falana said the FG ignored his request for information on the commencement of the trial. “They didn’t provide the information we demanded, but we are still watching them. I learnt that the office of the AGF had filed an application at the Federal High Court, seeking leave to continue to keep about 47 of them in custody,” he stated.

Interestingly, Malami, in an interview with journalists in New York at the 76th session of the United Nations General Assembly, said the Federal Government has been vigorously and intensively working to leave no stone unturned in the prosecution of Boko Haram financiers and the fight against terrorism.

According to him, Nigerians would be properly and adequately informed about the investigation and prosecution process at the appropriate milestones as they unfold.

His words: “The position, as it stands, is that investigation has reached an advanced stage and the government will make a statement in that direction in due course. Time is not ripe for holistic disclosures so as not to pre-empt the investigation process. The prime object remains the attainment of peace and security of the nation.

“As for terrorism funding and financing, we have succeeded in identifying those that are allegedly responsible for funding same and we are blocking the leakages associated with funding while embarking on an aggressive investigation that is indeed impacting positively in terms of the fight against terrorism.

“The truth of the matter is that investigation is ongoing and advancing. For the purpose of investigation, I would not like to be pre-emptive in terms of making disclosures that will have the effect of undermining the successes we are recording. One thing I can tell you for sure is that whatever we do in terms of detention and arrest is indeed backed up by judicial processes. We have acquired and obtained legitimate court orders taking into consideration the facts and material proof of evidence presented before the court on account of which the court eventually exercised its discretion by granting orders that we can have the suspects in custody pending the conclusion of the investigation.”

He reiterated that the FG through the “complex case group” of the Department of Public Prosecution of the federation in his office reviewed over 1000 Boko Haram case files, out of which 285 have been filed before the Federal High Court based on prima facie evidence of terrorism against them.

“The delay witnessed in prosecution process was occasioned by COVID-19 lockdown, Judiciary Staff Union (JUSUN) strike and court vacation,” he repeated, adding that naming and shaming of suspects is against the FG’s policy, which is borne out of sheer respect for the constitutional rights of Nigerians relating to presumption of innocence.

He maintained that the names of the suspects would be accordingly made public at the point of judicial arraignment, while the shaming remains a consequence of judicial conviction.

However, an online media platform had claimed that about 300 terrorism suspects were recently released by the AGF, instead of proceeding with their prosecution. Reacting to the allegation, Malami described it as “a malicious misrepresentation of facts relating to the ongoing investigation of terrorism financing suspects in Nigeria.”

According to the AGF, none of the suspected financiers in respect of whom remand orders were procured by the FG was at any time ordered or facilitated to be released by him.

He stressed that the fight against the menace of terrorism is an ongoing operation characterised by intelligence gathering, arrest, investigation and prosecution.

He added that the story was spuriously fabricated, inherently contradictory and substantially mischievous. “By their own showing, the office of the AGF has deposed to an affidavit on account of which an order of a court was obtained, seeking for the continued detention of those financiers that were alleged to have been in custody. This, by implication, established that the matter is effectively submitted to the jurisdiction of the court. It is common knowledge that where a matter is submitted to a court of law, it is only through the judicial process that any subsequent action can possibly be taken,” he argued.

A Lagos based lawyer, Ezebube Chinwike, who wished the process could be fast-tracked, explained that the criminal jurisdiction of a court is activated through a formal charge before a court of competent jurisdiction. “So, without a formal charge filed against a suspect, the machinery of justice via the judiciary has not been set in motion.

“The public could conclusively say that the FG knows sponsors of terrorism, with positive evidence to grant a conviction under the Terrorism Prevention (Amendment) Act 2013, which provides measures for the prevention, prohibition and combating of acts of terrorism, and financing of terrorism,” he argued.

Wondering why the delay, Chinwike cited Section 1 Subsection 2 (a-h) of the Terrorism Prevention (Amendment) Act, which provides for activities, liability and sponsorship of terrorism to buttress his point.

He, however, pointed out that it is important that security agencies conclude investigations before the prosecution of persons or organisations indicted, adding that those could be handled with every sense of urgency. “This cannot be done by mere lip service but by concentrated positive efforts, which is presently lacking since the Terrorism Act seems to be in abeyance and relegated to the background with the amnesty being proposed for arrested terrorists.

“If the terrorists are granted amnesty, it definitely would be applicable to their sponsors too. So, we are invariably back to square one, where the will to enforce existing law is lacking,” he reasoned.

Noting that terrorism is a global challenge, he warned that except suspects are prosecuted and punished for crimes against humanity with concerted global collaborations, sponsorship for terrorism would continue to evolve.

He condemned the general state of insecurity, occasioned by payment of ransom to terrorists when they abduct citizens. “What can we call our present situation where bandits kidnap people and are paid ransom by the government? Is that not a form of sponsorship for terrorism?” He asked.

Also, an Abuja based lawyer, Joseph Ekwe, said it is the duty of the AGF under section 174 (1) of the 1999 Constitution to institute criminal proceedings against any person before any court of law in Nigeria. “He can take over any such proceedings that have been instituted by any other authority or person, and he can discontinue any criminal proceedings at any stage,” he pointed out.

According to him, the AGF is the eye of the law of every country and he is always appointed by the president. Unfortunately, the AGF, he said, is also the minister for Justice. “Being the Minister for Justice (MOJ) makes him more of a politician than an AGF.

The AGF has unbridled powers under the Constitution to prosecute suspects at any time and nothing will happen. The highest his appointer can do is to relieve him of his appointment, but all the actions performed by the AGF cannot be reversed by his successor.

“If we do not prosecute or heal the injury, the nation will continue to be ill. A breach of the law of a nation without consequences will inevitably collapse the society. It’s a matter of time!

“But the sad side of the whole thing is that the AGF can pick and choose who to prosecute and when this happens, injustice is entrenched,” he exclaimed.

For Ekwe, Nigeria has since 1999 had ministers for justice and not Attorneys General. Consequently, he called for the separation of the office into two – MOJ and AGF, so that the president would have no control over the AGF, who would not mind the disposition of government in power in prosecuting culprits timeously.