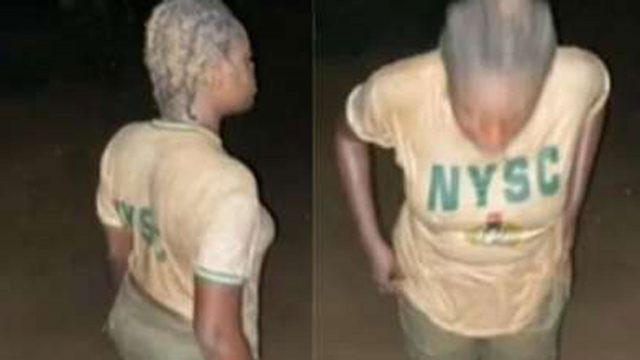 The video, which has gone viral, tells the story. It surfaced on Thursday, September 23. When I watched it, my stomach churned. And I was diminished as a human being.

There, a grown woman, a National Youth Service Corps member, identified as Ezeiruaku Ifeyinwa Fidelia, was forced to kneel down by her fellow young woman, just because the oppressor was in an Army uniform. Ms. Ezeiruaku’s posture painted the picture of an innocent captive, waiting to be shot dead, or beheaded by ISIS terrorists. The difference: She was not wearing an orange prison uniform.

As she helplessly knelt down, in her full NYSC uniform, the young female Army officer, identified as Lt. Chika Viola Anele, put her through hell and back. She dehumanised her in every way possible.

She began by using a plastic bowl, vigorously rubbing it on the Corper’s head. Then she started scooping dirty water from a plastic container, using the plastic bowl, and pouring the water on Youth Corper Ezeiruaku from head to toe. As she poured the water on her (a number of times), she also hit her, on the face, (a number of times), with the bowl.

This shameful, sad, incident took place at the 13 Brigade Calabar, Cross River State. Ms. Ezeiruaku, a young graduate, was posted there for her Primary Assignment, and Lt. Anele is a junior officer at the Brigade Headquarters.

Nobody knows what the problem was. A man’s problem? An ego problem? Or just brazen show of power? Whatever it was, Lt Anele has behaved in a most disgusting, reprehensible, manner. And, she should be made to pay the price for her behaviour. She should lose her commission and her right to wear an Army uniform. Not even that of a Lance Corporal.

The uniform which she wore as she committed the shameful act, and derided Ms. Ezeiruaku, belongs to the Federal Government, not to her. The (undeserved) respect she commands each time she wears that uniform is because of the uniform, not because of her as a person. Otherwise, who cares about her?

Two, Ms. Ezeiruaku, a Youth Corper, was also wearing her own uniform. That uniform too, belongs to the Federal Government. By pouring dirty water on her and the uniform, she has committed an unforgivable, jailable offence. Lt Anele does not deserve to wear that uniform a minute more than necessary.

Three, this officer has displayed gross indiscipline, and disgraced the Army. When you are a commissioned officer, you are, in spite of your crude self, regarded and referred to as an officer and a gentleman. Lt Anele, by her crude behaviour, is undeserving of being referred to as an officer, or a gentleman. She represents everything that an officer should not represent. She does not represent the Nigerian Army, especially those laying their lives down to protect us.

Four, talking about representation, Lt Anele represents everything a woman should not. Military or not, women usually have a softer side. Or, why does their breasts produce milk? But, not this Lt. She has, by her singular act of wickedness, shown the smelly side of her womanhood. She is one of those women who treat their househelps like animals.

They humiliate them. They dehumanise them. They beat them mercilessly. They starve them. They dress them in rags. They deny them of sleep. And strips them of every (human) dignity. It would be nice to find out if Lt Anele lives with a house help, even a relation, in order to confirm how she treats them.

As earlier stated, the beef Lt Anele had with Ms. Ezeiruaku is not yet public. It needs to be made public. The story out there is that the authorities at the 13 Brigade, Calabar are allegedly, trying to cover-up this scandal. Even though that has been denied by Army Spokesman, Brigadier General Onyema Nwachukwu who, in a statement on Thursday, September 23, said an investigation was already on, I pray there should be no cover-up from any quarters.

Again, here is why. The Army must separate the wheat from the chaff.

Ms Ezeiruaku was posted to them, and so, she is their responsibility. One of their responsibilities towards her is to protect her. They have already failed in that. They failed to protect her from Lt Anele. It will be a scandal if they, also, sweep any part of this scandal under the carpet. If they do, they should be told, in words and deed, that they are culpable or, in Military language, learnt during the regime of General Sani Abacha, “accessories after the fact.”

Years back when I did my Youth Service in Bauchi State, those of us privileged to serve with the Army were very proud of that. We walked like we had wings attached to us. It was one of the best times of my youth. Serving with them helped me in life. And, a number of the invaluable relationships I have today date back to those good years, when we roamed freely, the whole of Bauchi, Jos, Kano, Gombe, without the fear of Bandits and Boko Haram and the lot. That I play squash till this day, is thanks to that period. Now, you can imagine if we had a Lt Anele to supervise us.

If Lt Anele is such a terror, they ought to know where to have sent her too. She should have been posted to the frontlines to meet with terrorists out there in parts of the North, terrorising innocent people.

Yet, in all these, where is the leadership of the NYSC in Cross River State? What is their response? Or have they not seen the viral video? What about the leadership at the national level? Did they deploy Ms Ezeiruaku to 13 Brigade Headquarters Calabar to be dehumanised? Where are the Youth Corpers posted to Cross River State? Have they lodged a protest in writing? Why are they playing deaf and dumb?

I also call on the Human Rights community and women, especially, Igbo women, to move into this case. Isn’t it an irony that Lt Anele would humiliate a fellow Igbo woman as she did? Instead of protecting and guiding her, she becomes the one to give her the “deepest cut.” I can almost assure you that no Northern or Yoruba female officer could have done that.

When they speak their dialect, it is “case closed.” Lt Anele’s type is the reason why people erroneously say the Igbo don’t like one another. Hers is a clear case. When you speak Igbo to some of them in their “big-big” offices, it is even a crime. They either thumb their noses at you, or reply in English! The Igbo say they are not liked, they are being prosecuted, yet…! Isn’t that why, in the name of protesting the prosecution, the Igbo are killing themselves, destroying their Zone, and inflicting the worst form of punishment on themselves? Isn’t that why our Zone has been reduced to a war zone, and our people are afraid to visit home?

Finally, Ms Ezeiruaku should not leave her fate, absolutely, in the hands of others. She should sue Lt. Anele for everything she has got! What sort of country do we live in? Animal Kingdom?