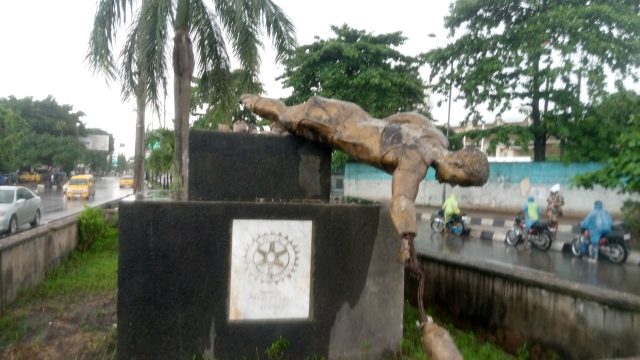 • Ministry assures revival, says proposals needed for restoration Before now, the presence of sculptured statuses at various intersections and roundabouts in Lagos was a major attraction for visitors to the mega city.

In these areas, works of arts are neatly placed on a well-contoured base and provide lovely ambience for residents and visitors.

However, with passage of time, the statues have deteriorated and are no longer famous as they used to be. In some places, hoodlums and the homeless have made a mess of them.

When The Guardian visited some of the sites, they were a shadow of their old selves.

At the intersections in Ojuelegba lies the broken sculpture depicting youth corps member firmly holding a pole in demonstration of how to hoist the national flag.

Sources said the flag has been in a bad state for about two years without attention.

Since its erection in the late 1990s, the deteriorating sculpture has only been repainted twice by corps members, a vendor adjacent to the site, Samuel Gressman, told The Guardian.

Gressman, who disclosed that the site has now become a cottage for hoodlums and some homeless migrants, said, “In the absence of government support, Corp members often assemble at the site to refurbish the statue and for it to be safe and kept tidy, government needs to consolidate on their efforts.”

Also, at the site of an educational statue around Sabo, Yaba, a resident, Aluko Michael, said the artwork resurrects the spirits of past heroes, illustrates common values and promotes educational values among others.

Commenting on the educational statue, Michael decried the deplorable state of the site compared to when it was commissioned in 2017.

He said: “All the lightings and chairs that beautify the site are now in a state of disrepair as the site is now inhabited by hoodlums, but majorly by a madman, who has been degrading the place for over two years.

“The madman even sold some irons railings that were put to protect the place, including a gate which he sold as to scrap.”

The same held true of the sculpture opposite the National Stadium, where there are three statues erected at intersections leading to Ojuelegba, Yaba and Oyingbo.

One of them, was a famed Tinubu’s traditional cap, indicating the political empire of former Lagos State Governor, Bola Tinubu.

According to a source, the statue collapsed as a result of a fire accident that happened about three years ago.

The source said the status has remained unattended to since the ugly incident that brought it down.

The second statue on the middle lane erected by the Rotary Club of Surulere was vandalised during the EndSARS protest and it has not been renovated since then.

Similarly, the third, a statue of three footballers was among those defaced during the EndSARS protest.

Giving account, a young man, who gave his name simply as Adekunle, blamed Lagos State government for the deplorable state of major sculptures in the state.

He said with adequate attention, such artworks would improve Lagos aesthetics.

According to him, such sights serve a vital aesthetic purpose, but it is unfortunate that they are left in the care of hoodlums, who have turned them to their abode.

Confirming this, a group, who camouflaged as officials of National Union of Road Transport Workers (NURTW), after grilling the reporter, confessed that they were part of those that broke the sculpture during the EndSARS protest.

Defending their action, one of them said the statues do not contribute anything to the state, but are avenues for government to siphon money at the expense of the citizens.

But Head of monument, Lagos State Ministry of Tourism, Culture and Art, Lawal Olatunde, told The Guardian that plans are ongoing to restore the decaying monuments on streets of Lagos.

He said some defaced ones like that of the late Kudirat Abiola have been renovated.

Olatunde stressed that most of the arts were vandalised by miscreants, referencing the EndSARS scenario, which led to destruction of many state-owned infrastructures.

He said: “Many people do not know the importance of these statues and as such they misuse them.

“Most of them are done by an artistic company, TerraKulture in conglomeration with several sculptors. And for the ministry to restore broken sculptures, there is a need to bring all the sculptors together as necessitated by the law.

“The sculptors have to come up with their own restoration plan including the finance that will be expended on the projects.

“What is stalling the entire process is that many of the sculptors have travelled out of the country and the law does not permit us to touch the art works in their absence.”