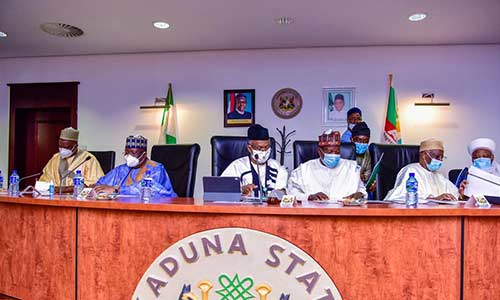 The Northern Governors’ Forum will on Monday (today) hold an emergency meeting to discuss issues relating to the Value Added Tax, The PUNCH reports.

It was further gathered that the planned meeting, which would be hosted by the Kaduna State Governor, Mallam Nasiru El-Rufai, would be presided over by the Chairman of the forum and Governor of Plateau State, Simon Lalong.

The Coordinator of the Northern Governors Forum Secretariat and Secretary to the Plateau State Government, Professor Danladi Atu, confirmed the planned meeting in an interview with The PUNCH in Jos on Sunday.

Atu said this as some senior lawyers took on the Attorney-General of the Federation and Minister of Justice, Abubakar Malami, SAN, over his recent statement that no state had the power to lay claim to the collection of VAT in the country.

The Federal High Court sitting in Port Harcourt had in a judgment last month held that Rivers State had the power to collect VAT within its jurisdiction.

But the Federal Inland Revenue Service headed for the Court of Appeal to challenge the judgment. At the appeal court, Lagos State filed an application that it should be joined with Rivers State as a co-defendant in the appeal filed by the FIRS.

The appeal court ordered parties in the suit to maintain status quo pending the determination of the appeal.

Malami, in an interview with Channels Television on Friday, said collection of VAT in the country was on the exclusive legislative list, adding that only the National Assembly had the power to make laws on VAT.

He stated, “As you rightly know, the issue of the Value Added Tax is an issue on the exclusive legislative list. And the implication of being on exclusive legislative list matter is that only the National Assembly can legislate on it. The question that you may perhaps wish to address your mind on is whether there exists any national legislation that has conferred the power on the state to collect VAT. And my answer is ‘no’.