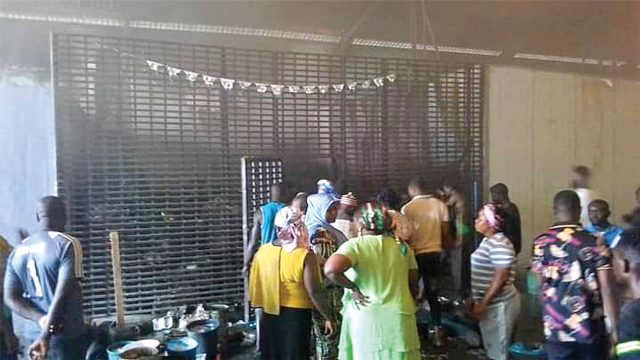 Several goods were destroyed yesterday when an early morning inferno gutted a block of private warehouses on Moshood Abiola Way, in the Ijora 7-Up area of Apapa-Iganmu, Lagos State.

The warehouse was used to trade and stock frozen fish and take-away plastic packs. Director, Lagos State Fire and Rescue Service, Margaret Adeseye, who confirmed the incident, said the cause of the fire was still unknown. She was quoted in a statement as saying, “The Lagos State Fire and Rescue Service is presently attending to a warehouse fire at 243, Moshood Abiola Way, Ijora 7-Up, Apapa-Iganmu LCDA, Lagos.

“The fire, which was reported around 11.04 a.m. on Sunday saw the deployment of Sari Iganmu Fire Station to douse the fire affecting some private warehouses used to trade and stock frozen fish and take-away plastic packs.

“The fire, which cause is yet unknown, has been contained to the warehouse block where it emanated from while other four blocks of warehouses were saved without any injury or death.” Meanwhile, the fire has been put out, without colossal damage as responders were able to contain it from spreading to other blocks. Also, the fire service said it has launched an investigation to unravel the cause of the fire.