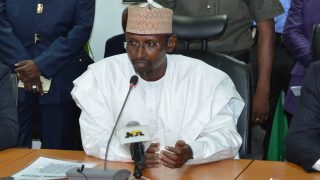 The Federal Capital Territory Ministerial Task Team on City Sanitation on Monday demolished shanties and other illegal attachments used by the Bureau De Change Operators and traders in the Wuse Zone 4 area of Abuja.

According to the team, the area had become an eyesore and was distorting the master plan for the area.

The Assistant Director, Monitoring and Enforcement, Abuja Environmental Protection Board, Kaka Bello, told journalists that traders and the BDC operators were constituting environmental nuisance in the area, adding that the AEPB will ensure that the exercise is continuous.

Bello warned that operators caught operating outside their offices would be arrested and prosecuted.

He said, “Most of the offices in Zone 4 are owned by BDC operators but unfortunately, some of them resolved to be trading outside, which is illegal.

“For the Bureau De Change operators, they should please ensure that they carry out their businesses within their office premises, not by the road corridors.

“We also appeal to the general public, especially those who patronise BDCs, to please patronise them in their offices.

“And anybody caught outside operating will be arrested and prosecuted accordingly, and mobile courts are already on standby, waiting for people, who are indulged in these activities to be arrested and brought before it.”

The Chairman, FCT Ministerial Committee on City Sanitation, Ikharo Attah, said the operation was based on ministerial directive.

Attah revealed that the FCT Minister, Muhammad Bello, about a month ago visited the area and saw the level of contraventions in the heart of the city.