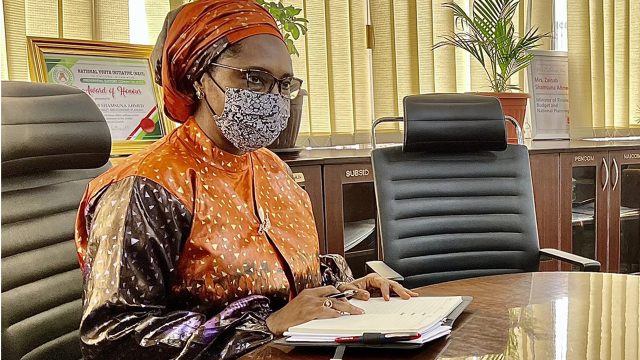 Minister of Finance, Budget and National Planning, Zainab Ahmad, says the growth and development of any country depend on the level of the resourcefulness of its citizens, especially the youths. The Minister made this known on Saturday in Kaduna at the fourth combined convocation of Kaduna State University. The minister and four other personalities were conferred with honorary degrees by the university.

Ahmad who spoke on behalf of the recipients, noted that the Federal Government has put in place programmes to encourage the creativity of Nigerians, especially the youth.

”We recognize that every country’s growth and development depend on the level of the resourcefulness of its citizens, especially the youths.

“Our young ones are increasingly becoming innovative and creative in the use of technology to address local challenges.

“The Federal Government is putting in place structures and programmes to support and empower youth to use their energy, creativity, and skills to grow the economy and support government efforts,” she added.

According to her, the President Muhammadu Buhari administration appreciates the contributions of universities to the development of the youths.

“I am convinced that the works of institutions like Kaduna State University and other universities will support and help to expand the nation’s educational frontiers to flourish throughout the length and breadth of Nigeria.”

She appreciated the honour done to them by the university and pledged to work for its growth and development.

The finance minister also spoke on the disruption caused to the nation’s economy by COVID-19 and efforts being made to stimulate growth.

She said that the Federal Government was working to make the Nigerian economy more inclusive, sustainable and resilient.

“The plan which costs roughly 1% of our GDP was intended to stimulate and diversify the economy, retain and create jobs and extend more protection to the poor.

According to her, the most noteworthy piece of green spending is a $619 million commitment to the Solar Homes Systems Project.

She explained that the plan was put together to help install solar home systems for up to five million households, to serve about 25 million Nigerians not currently connected to the national grid.

In his remarks, Gov. Nasir El-Rufai of Kaduna State said the state has committed resources to develop the university to global standards.

He explained that the government is developing a new permanent site for the institution, spent N5 billion on its recurrent expenses, as well as N10 billion on capital projects in 2020.

“This level of investment is evidence that the government is committed to raising the quality of learning in our tertiary institutions.

“As institutions charged with developing high-level manpower, our universities and other tertiary institutions must themselves be seen to be exemplars of quality and excellence,” he added.