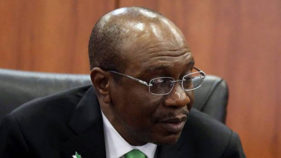 Speaking at the Finance Correspondents Association of Nigeria (FICAN) 2021 Annual Conference and 30th Anniversary Celebration, he said the economy is on a recovery path following the roll-out of the COVID-19 vaccines, reopening of economies globally, as well as the implementation of the various stimulus packages by the fiscal and monetary authorities.

In his keynote address read by CBN Director, Corporate Communications, Osita Nwanisobi, themed ‘Financing Infrastructure & SMEs for inclusive growth in the post-COVID-19 economy’, Emefiele said the National Bureau of Statistics showed that Nigeria’s Gross Domestic Product (GDP) grew by 5.01 per cent in the second quarter of 2021, with the non-oil sector growing by 6.74 per cent, compared with the oil sector which contracted by -12.65 per cent.

He noted that the economic growth was driven by enterprises in agriculture, energy (electricity, gas and steam), road transportation, telecommunications and trade.

He said financing gap for MSMEs in Nigeria is estimated to be about N617.3 billion annually pre-COVID-19 pandemic, as less than five per cent of these businesses have access to adequate finance to support their working capital and business expansion needs (PwC).

“While MSMEs have been recognised to play a critical role in supporting the growth of the Nigerian economy, poor access to finance, particularly credit, and lack of quality infrastructure such as electricity and access to market, continue to pose significant constraint to the growth of MSMEs in Nigeria.

“Thus, weak and inadequate infrastructure as well as poor flow of credit to businesses impact severely on economic growth as well as human development,” he said.

He disclosed that in realization of the importance of access to finance and infrastructure to economic growth and development, the CBN has taken steps beyond its traditional macroeconomic mandates of ensuring price and financial system stability, as well as maintaining a strong external reserve.

To this end, the bank introduced several development finance policies and programmes to improve access to credit for MSMEs, deepen the Bank’s support to the real sector, support job creation and build a robust payment system infrastructure to help drive financial inclusion.

The deficit, estimated to be around $31 billion a year, continues to hinder productivity, increases the costs of doing business and isolating markets.

The CBN boss stated that bridging the infrastructure gap, therefore, as a means of overcoming the region’s economic and developmental challenges cannot be over-emphasised.

“While governments in the sub-Saharan Africa continue to make progress in closing the deficit over the past decade, the continent still lags the rest of the world in coverage of key infrastructure classes, comprising the ICT, energy, roads and rail, transportation, water, and sanitation,” he said.

The CBN boss said Nigeria’s infrastructure deficit remains a major constraint to economic development and attainment of growth average rate of at least five to seven per cent required to boost productivity and sustainable growth for businesses.

According to the World Development Indicators (2019), 56.20 per cent of Nigerians have access to electricity, while electric power consumption stood at 144.52 kWh per capita as of 2018. While infrastructure deficit in Nigeria is estimated to be about 1.2 per cent of GDP, it is projected that the Federal Government needs to commit about US$100 billion annually to address the nation’s infrastructural deficit.

He said the MSMEs sector that has also emerged as a significant source of growth, innovation and job creation is the micro, small and medium enterprises (MSMEs). According to the World Bank, this sector represents an estimated 90 per cent of businesses and employs over 50 per cent of world’s labour force. In fact, formal MSMEs have been identified to contribute about 40 per cent of GDP in emerging economies, of which Nigeria is one (PwC).

“Lack of access to quality infrastructure has been a limiting factor to MSMEs in developing countries delivering on their potential for growth and creating employment. Beyond infrastructure, access to finance remains one of the biggest threats to MSME development in both developed and developing economies alike, with serious implications for productivity, economic development, and job creation.

”Access to credit has been identified as a critical enabler for the growth and development of MSMEs, as the overall credit gap for MSMEs in developing countries is estimated to be US$5.2 trillion, representing 19 per cent of these countries’ cumulative GDP (IFC). Of this, the unmet financing demand from MSMEs in sub-Saharan Africa is about $331 billion, representing 18 per cent of the potential demand for credit by MSMEs in the region.”

Other constraints to MSME development in Nigeria, as noted in the survey, include difficulty in finding customers, infrastructure deficit, insufficient cash flows, multiple taxation, regulatory burden, and sub-optimal implementation of the provisions of the MSME policy.