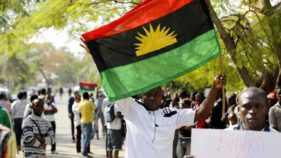 There is disquiet in the South East following declaration by the proscribed Indigenous People of Biafra (IPOB) that the region would be totally shut down on Friday, October 1, 2021.

The separatist group said the decision is to demonstrate against its rejection by the Federal Government.

October 1 is Nigeria’s independence anniversary celebration. A public holiday is always declared by the Federal Government on this date for Nigerians to celebrate the country’s independence from the colonial masters.

In a statement by the Media and Publicity Secretary, Emma Powerful on Saturday, IPOB stressed that there would be no movement in the zone on that day (October 1), calling for strict adherence to the directives to avoid regrets.

It urged world leaders to use the opportunity of the on-going United Nations General Assembly, UNGA, meeting to discuss the sufferings of the “two persecuted nations of Biafra and Ambazonia.

IPOB had on different occasions announced the suspension of the Sit-at-home order but ended up flouting them.

People in the region have expressed frustration with the outlawed group’s penchant of shutting down the region as it pleases, regretting they have suffered untold pains and hardship since the directive started.

In Anambra, the residents say the Indigenous People of Biafra should not allow Ndigbo to revolt against it because of the incessant sit-at-home orders.

A community leader in the state, Chief Alphonsus Okafor, said IPOB was beating more they could chew by declaring sit-at-home again on Nigeria’s Independence Day.

According to the elder statesman, “the idea of telling people not to go out all the time is becoming like a child’s play and I don’t think most of the young people who are not their members will continue to stomach it.

“The worst part of it is that they have equally banned Nigerian flag from being hoisted on the day in the Southeast. This is absolute madness

“It will get to a point where the masses will start pointing them one after the other to the security operatives, but it will not be fair to Igbo. The implication of such action is reducing our number.”

Speaking with The Nation, Saturday in Awka, Governor Willie Obiano’s Special Assistant on Community Matters, Comrade Obi Ochije, said the group should play mature instead of being childish.

He said the idea of Biafra was good, the reason, he said Igbo had been respecting their sit-at-home, adding that it was wrong for IPOB to declare another sit-at-home on October 1st.

“Ndigbo respect the idea of the pursuit for sovereignty, but telling the people to sit-at-home every now and then is not good

“What they are doing is slowly killing the people by collapsing their economy. They should fix their sit-at-home any day their leader Mazi Nnamdi Kanu appears in Court and the people will respect it, but for all the time? It’s not good for Igbo.

When the State Commissioner for Information and Public Enlightenment, C Don Adinuba, was called, he did answer the calls.

But a senior government official who pleaded anonymity, told The Nation that IPOB members were simply courting trouble for Ndigbo

According to the source, “those people are taking Ndigbo as people without aim. There’s nothing government plans that doesn’t work. They should have a rethink on this their new move, that’s my advice.”

Enugu Residents of Enugu metropolis yesterday described the fresh sit-at-home order issued by IPOB as mockery for the struggle for the sovereign state of Biafra.

The residents, who spoke with our correspondent in Enugu on Saturday, frowned at the frequent declaration of sit-at-home by the pro-Biafra group.

According to the Executive Director, Centre for Southeast Economic Renaissance (CenSER), Dr. Chuma Udom, “You will agree with me that frequent declaration of sit-at-home by the pro-Biafra group only showed that the group had since run out of ideas over the Biafra agitation.

“IPOB as a group wants us to believe that without Nnamdi Kanu, no other person can come up with a better idea of how to pursue the Biafra agitation? I mean, we cannot continue to stab ourselves and expect our perceived enemy to be bleeding.

The apex Igbo socio-cultural group, Ohanaeze Ndigbo, lamented that IPOB is deviating from being the lover of the Igbo development to inflicting their people with hardship.

According to the spokesman, Hon. Alex Ogbonnia: “I don’t think the IPOB which Nnamdi Kanu represents, which he epitomises, will like to inflict hardship and injuries on Ndigbo.

“They will lose the solidarity and sympathy of the people and the essence of the agitation will become questionable and it will turn out against them and become counter-productive,” Ogbonnia stated.

In its reaction, the Association of South East Town Unions (ASETU) called on the group to device other ways of registering their civil disobedience because of the implication on the economy of the region.

According to its spokesman, Collins Opuruzor, “They should reconsider because it does not affect the aggressor in anyway but hurting ourselves. If they could rescind such a declaration, it will be in the best interest of the Igbo people. Of course, Igbo people thrive by their daily bread. They should rescind it and device other ways of registering their civil disobedience.”

Abia Abians have faulted the leadership of the Indigenous People of Biafra (IPOB) over their position to begin dismantling of Nigerian flags across the region.

The respondents stated that such action would not guarantee them (IPOB) Biafra.

A social commentator, Mr. Sampson Peter, said it will be counter-Biafra agitation than being an enabler if the group goes ahead with its threat to bring down Nigerian flags in the Southeast.

“How can a group that doesn’t believe in Nigeria be worried about Nigerian Flag? For me, it is a deviation from their original agitation.

“It will result to many deaths as security agencies will not fold their arms and watch a group that has been already proscribed by the Federal Government going about dismantling Nigerian flags.

“For me, it is channeling their energy wrongly. When they called for a sit-at-home, people willingly or cohesively obeyed their orders. And I can tell you that a lot of businesses are still battling with the effect of the sit-at-home order.

“Calling for a sit-at-home on October 1 is inconsequential because the Federal Government has declared the day a public holiday. So, how is it going to have impact on the people?

“I will rather ask that they should be strategic in their actions. If they pull down Nigerian flags, have they gotten Biafra? Will that make Biafra to come fast? Will it stop Nigeria from existing?

“They shouldn’t make people believe that they are clueless and have run out of ideas as their actions depict a sinking man looking for what to hold while battling for survival.

“There are better strategies than this their approach.”

Imo A former President of Ohanaeze Ndigbo in Imo State Dr. Ezechi Chukwu, has said that the Sit-at-home order of IPOB is a disservice to Ndigbo than the marginalization cry of the zone.

He said the Igbo cannot continue to cry against marginalisation when in the actual sense they are causing more harm to themselves than the marginalisation.

“We cannot be crying of marginalisation of Ndigbo and at the same time we are inflicting pains on ourselves than the cry for justice. What do we intend to gain when we are shutting down all businesses in the region?

“The Sit-at-home in South East does not make any impact to carry out the protest in the zone while the seat of power is in Abuja. If we want to make an impact it should be organised in Abuja not in the South East where the protest is causing more pains to the people.”

Also speaking, the President General of Coalition of South East Youth Leaders(COSEYL), Goodluck Ibem, said though, Ndigbo were not happy of the I’ll treatments metted out to them in Nigeria , the issue of Sit-at-home was destroying the projects they fought hard to get.

“Though, we are very unhappy over the ill-treatment of Ndigbo in the Nigerian project, a project that we fought so hard to achieve. The operation ” No Nigerian flag in Biafraland” will only end up heating up the South East and some over- zealous youths may end up been killed in the process. .

“The Ghost Mondays sit-at-home that was cancelled have not been resolved by IPOB. We expect them to first resolve that matter that has been hijacked by criminal elements who rob innocent citizens of their phones and valuables in the name of enforcing the cancelled sit-at-home order.

“The best option is for IPOB to look for other ways of going about its activities and avoid directives that will endanger the lives of overzealous youths, who because of the ill-treatment of Ndigbo in Nigeria might decide to go into a military or police barracks to remove a Nigerian flag. That will be a suicide mission in all sense of the word.

“If the Federal government is so committed to the rule of law, why has it not extradited DCP Abba Kyari to the United States of America when was indicted by a court of competent jurisdiction in the US. Is the Nigerian government directly telling us that Nigeria is an animal farm where some animals are more equal than others? The IPOB Leadership should reconsider its directives before our overzealous youths voluntarily run to their untimely deaths.”

Prior to the Saturday declaration by IPOB, a faction of the Ohanaze Ndigbo led by Chidi Ibeh,said it is committed to providing a political solution for the release of the IPOB leader, Mazi Nnamdi Kanu from custody.

“Any other procedures and protocols including shutting down the southeast for one month, will not be able to get results.

Sitting at home in protests against the continuous incarceration of Nnamdi Kanu is a nonsensical and preposterous strategy before adversaries of Igbo. Our enemies are excited about the collapse and destruction of the southeast economy through the imbecility and absurdity of Sit at homes,” a statement by the Secretary General, Mazi Okechukwu Isiguzoro said.

“The exponents of Sit at home should be cautious of the regaining consciousness of Ndigbo to defy further directives, as the best approach before the IPOB leadership is to mobilize the disciples of Nnamdi Kanu in millions to take advantage of the October 21st Court trial and massively take over the streets of Abuja peacefully without confrontation with security agencies so that the international community will handle the matter and convince the Federal Government to do the needful.

“If 60 million IPOB members as acclaimed by the leadership can storm Abuja, they will be forced to produce Nnamdi Kanu before the Abuja High Court as sit -at -home is gradually fading away and Igbo are getting back from the dreamland to face reality.

“IPOB should face Abuja and get the required results, as Ndigbo are sympathetic to their causes since the Federal Government are pampering the Boko Haram terrorists and bandits and introduced secret programs for the secret rehabilitation of Boko Haram terrorists but uses full military operations in the South against agitators fighting against the killer herdsmen and government policies that promote nepotism. IPOB will gradually lose Igbo support if they continue to make things difficult for Ndigbo.”