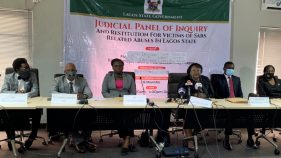 The chairman of the Lagos State Judicial Panel on Restitution for victims of SARS related abuses and other matters, retired Justice Doris Okuwobi on Friday said the panel has reported a lawyer to the Nigerian Bar Association (NBA) for extortion and lying to one of the victims awarded N10 million.

Justice Okuwobi accused the lawyer, whose name was not revealed, of unwholesome practices and attempting to drag the name of the panel into disrepute.

She stated that it had to intervene in the case of a petitioner who was awarded the sum of ten million naira as compensation, but from whom the counsel collected thirty per cent with a promise that he wanted to give ten per cent as appreciation to panel members.

The retired judge claimed that, “the counsel collected three million out of ten million naira awarded the petitioner as compensation for bodily injuries sustained from indiscriminate shooting by policemen at Ilasamaja, Lagos.

“The panel frowned at such irresponsible and criminal acts alleged against the counsel by his client and made it clear that it does not collect commission from anybody for the assignment,” she maintained.

The panel further stated that the conduct of the lawyer has been reported to the NBA which was present at the interrogation session on the matter at the panel chambers.

The Lagos State Judicial Panel also yesterday awarded a total sum of N19.2 million to six petitioners for the infringement on their fundamental right to life and human dignity by the Nigeria police force, while it dismissed one petition for lacking merit.