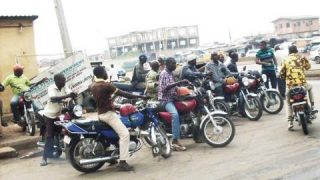 • Taskforce impounds 410 bikes, vows to sustain enforcement A policeman was yesterday feared killed, while scores were injured, following a clash between commercial motorcyclists, popularly called okada, street urchins (area boys) and operatives of Lagos State Environmental and Special Offences Unit (Taskforce), in the Ajao Estate area of the state. That trouble started when Task Force operatives raided the area to clampdown on okada riders and their motorcycles. The action led to a protest by okada riders with support of street urchins, who unleashed mayhem in the area, destroying cars and properties worth millions of naira.

The raid was part of the task force’s continued measure to put an end to okada riders’ penchant to disregard traffic rules and regulations in Lagos metropolis. When newsmen visited the area about 6:30p.m., most shops on busy Lateef Salami Street, Awoniyi Elemo, Asa-Afriogun and the popular Osolo way were closed, while commuters were stranded, as tricycles popularly called Keke Marwa were off the road, as operators scamper to safety. But Chairman of the task force, CSP Shola Jejeloye, in a statement issued yesterday by the Head, Public Affairs Unit, Femi Moliki, reiterated the unit’s resolve not rest on its oars until commercial motorcyclists’ penchant to disregard traffic rules and regulations is drastically reduced in the state.

Moliki told newsmen that the clampdown on Okada was part of the task force’s effort at checking the menace of Okada riders.

According to him, okada operators are recalcitrant, as they have continued to operate on the expressway, and even park indiscriminately, thereby obstructing free flow of traffic. He listed Ikeja along on Agege Motor Road, 2nd Rainbow, Iyana- Isolo, Toyota Bus Stop, and Mile 2, along Oshodi-Apapa expressway as areas the motorcyclists have continued to operate in total disregard to extant laws. Giving a breakdown of motorcyclists impounded, Moliki said a total of 410 motorcycles were impounded between last week and Wednesday, September 22 on prohibited routes, while 300 were impounded last week and 110 seized on Wednesday. He explained that operatives of the agency carried out enforcement in Isolo, Ojodu – Berger, Ojota, Lagos Island and Surulere last week, while the enforcement drive of the agency was also extended to 2nd Rainbow, where it seized 110 motorcycles on Wednesday.