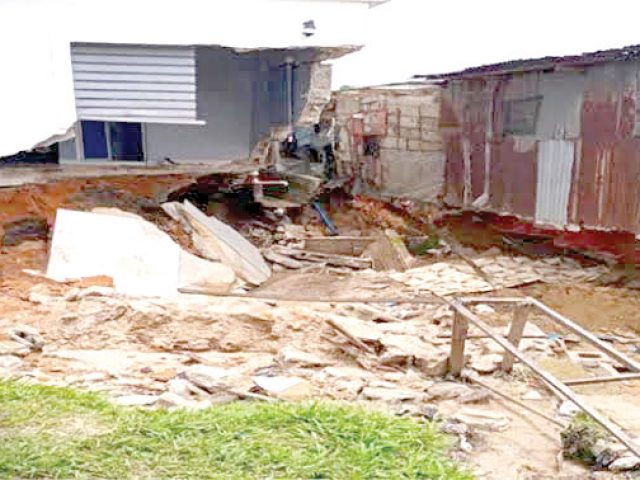 One person has been confirmed dead, while two others sustained injuries following the collapse of a section of a residential building in the Woji area of Obio/Akpor Local Government Area of Rivers State.

Both the deceased and the injured were carrying out reinforcement work on the apartment when it caved in.

The property owner, Mr. Ejike Ogbonda, blamed the incident on huge flooding, which caused havoc in parts of Port Harcourt and Obio/Akpor as a result of downpour on Tuesday. He expressed sadness that a man that was brought to carry out repairs on his property lost his life.

He said: “Around 6:00a.m. my wife woke me from sleep and said water was coming and that my gate was open. I have a drainage system that I personally did.

“From there you will see that the whole water that comes from Woji, Ogborama, and Apamini will retire back to my gate.

“Flood was moving towards the house direction so I ran back into the house to wake my kids and we ran out. Everybody in the compound, tenants too, came out and tried to lock the gate against the floods.

“The thing was still cutting, so we got an engineer. He brought two workers and they were working on the building before that thing happened. One is alive. The other one is dead,” he said with an emotion-laden voice.”

Ejike said he had rushed the victim to the hospital in his car and reported the matter to the Area Command, saying policemen accompanied him to the hospital where he was confirmed dead and was deposited in a morgue.

“We are begging the Rivers State Government and Obio/Akpor Local Government chairman to come to our aid, if not the entire building will go down. Let them come and do proper drainage for us because this is close,” he added.

Meanwhile, Chairman of Obio/Akpor LGA, George Ariolu has commiserated with the family of the victims. He promised to carry out an on-the-spot assessment of the building.

When contacted, spokesman for the State Police Command, Nnamdi Omoni said he was away for a programme and promised to get back to the reporter. But he was yet to give feedback as of press time.