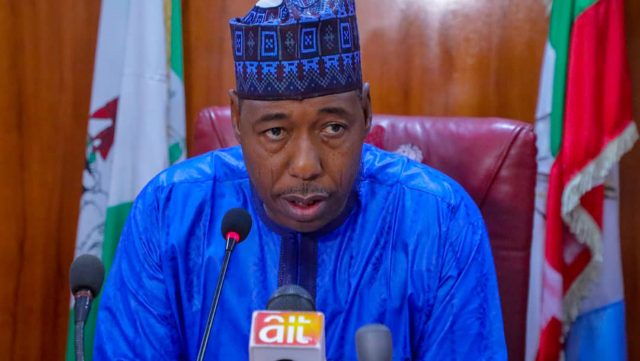 • Zulum advocates technology, citizens’ participation • Repair of four destroyed bridges to cost N3.8b, says Lai Mohammed • Defends Buhari’s quest for fresh loans Borno State Governor, Babagana Zulum, has urged the Federal Government to consider the deployment of technology for the protection of power, communications and other critical infrastructure in the country. He made this known in Maiduguri, yesterday, at a town hall meeting to address vandalisation of power and telecommunications infrastructure, organised by the Federal Ministry of Information and Culture.

Zulum said governments at all level were working assiduously to establish a sustainable framework to ensure proper handling of the process, even as he disclosed that the President has promised support for the initiative.

He explained how insurgents earlier this year blew up high-tension wires supplying electricity to the state. “This culminated in the darkness being experienced in the past months. This has been a harrowing situation especially for those who depend on constant electricity for their livelihoods. We mobilised resources to effect necessary repairs.

After spending millions of naira, the excitement was short-lived as the insurgents, 24 hours later, destroyed the repaired lines, along with others, subjecting the people to despair and hopelessness.”

The governor said since it is impossible to provide 24-hour protection to power lines in the state or any other part of the country, it has become imperative for the Federal Government to explore the deployment of technology to protect physical infrastructure.

“Our citizens should also be sensitised so that they will have moral obligation to protect all government infrastructure in their domain, in view of the huge investment the Federal Government is making in rehabilitating neglected infrastructure and constructing new ones,” he said.

Earlier, Minister of Information and Culture, Lai Mohammed, lamented that the destruction of public infrastructure was worse than had been imagined, saying it would cost the Federal Government N3.8 billion to repair four bridges damaged by vandals and petrol-laden tankers. He noted that the huge amount could have been used to build new infrastructure.

Mohammed said despite a drastic drop in revenue and competing priorities, the Federal Government has invested heavily in providing new infrastructure, as well as reconstructing and rehabilitating existing ones.

Also, Mohammed described critics of the government’s fresh request for foreign loans as insincere, saying the money is intended for building world-class infrastructure.

Taking a swipe at the past administration in the country, he said: “Had they embarked on the kind of infrastructure development we are currently engaged in, perhaps there would have been no reason for us to borrow as much as we are doing now. For example, in their time, they claimed to have spent billions of naira in building infrastructure. But as one can see, their infrastructure projects were only on paper.”

On his part, Christopher Musa, Theatre Commander of the Northeast Joint Task Force (Operation Hadin Kai), said saboteurs were making it impossible for government to restore electricity to Borno State.

“It is important we look inwards because there are people doing everything to ensure that the work is not completed. They have information about our movements on daily basis. Much as we try to maintain surveillance, as soon as we leave, information is passed,” he said.

Proffering solution to the illegal sale of electricity equipment, Musa said efforts must be made to ensure vandalised items are very difficult to sell. “There must be primitive punishments for anyone found selling them. We should also have carbon markings placed on some of the equipment, so that at any market where they are found, the sellers can be traced.”