Every Crime Deserves Its Punishment
Bolaji Ogungbemi
September 23, 2021
5:31 am 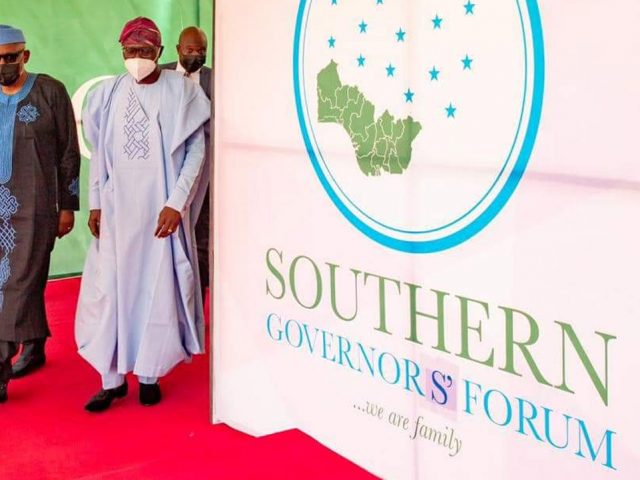 The latest meeting of the Southern Governors’ Forum held in Enugu last Thursday is still raising dust. Their excellencies have shown unusual solidarity across party lines to address the issues they believe affect their respective states.

One intriguing aspect of the last meeting was the absence of all the governors of the South East, except the host Governor of Enugu State, Ifeanyi Ugwuanyi. Each of the absentee governors was represented by his deputy. It was as if the governors were observing their own sit-at-home order given by the outlawed Indigenous People of Biafra (IPOB), the controversial group that has been in the news in recent times. It is noteworthy that all states were present, including those represented by their deputy governors.

Two issues have come to dominate recent Nigerian gubernatorial combats. One concerns the issue of the herdsmen. The newest has to do with who, between the Federal and the State governments, has the right to collect money from the Value Added Tax (VAT), which has become a subject of serious litigations. Both issues may have their legal aspects, but they are actually political matters that our leaders have to address.

In addressing the recurring issue of the herdsmen, our country seems to have fallen into the error of definition. In recent years, it has been discovered that rogue herdsmen, mostly Fulani, have been involved in serious crimes, including mass murders and kidnappings. Most of these crimes have been committed on the Jos Plateau and the Niger and Benue valleys. These rogue herdsmen have compounded the armed insurgency of the Boko Haram terrorist group. The Federal Government, controlled by the ruling All Progressives Congress (APC), has been reluctant to label the herdsmen as a terrorist group even when all the evidence points to their sinister aspects. In the North-West of Nigeria, especially in Katsina, Kaduna, Zamfara and Sokoto state, a new aspect was introduced with bands of rampaging bandits moving about sacking one village after another and kidnapping citizens, especially women and children, in their hundreds. They have been pressing hundreds of citizens into slavery and serfdom and yet the Federal Government has refused to categorise them as a terrorist group. Instead, it prefers to deodorize them as bandits. Bandits! Whose bandits?

The Southern Governors were unanimous in banning open grazing as part of their recommendations for dealing with the issues of suspected criminal Fulani herdsmen. At the heart of this controversy is how to separate the criminals from the normal vocation of the herdsmen. To muddle the water was the meddlesome impertinence of the group called Miyetti Allah and other non-state actors who, for political purposes, tend to take ownership of all Fulani deeds, including the criminalities of the suspected herdsmen. What has worsened the matter is the assumed indifference, if not collision, of some power players close to President Muhammadu Buhari, who is suspected to be sympathetic to the activities of the Fulani herdsmen.

It is a notorious fact however that just like the National Assembly, every Nigerian ethnic group is represented in crimes. After the Nigerian Civil War, there was an upsurge of armed robberies and other violent crimes. Some people speculated that these crimes may have been perpetrated by elements of the disbanded Biafran army who had access to illegal weapons. Then the police under Alhaji Kam Selem, the Inspector-General of Police and Chief Theophillous Fagbola, his deputy, moved to arrest the criminals. When the suspects were hauled in, it was discovered that every Nigerian group was represented and that most likely the Yoruba, like Ishola Oyenusi and Babatunde Folorunsho, topped the list. Babatunde Folorunsho and two members of his gang, Williams Oyazimo and Joseph Ilobo were the first set of criminals to be executed at the Bar Beach in 1971. This time around too, the Fulani may top the list, but they are certainly not alone in the lucrative business of crimes.

The governors, however, have rightly concluded that there may be a linear correlation between the business of open grazing and criminality. With their new resolution, the governors have to grapple with the practical aspect of how to deal with fellow citizens who are in the legitimate business of herding. Most herdsmen are Fulani because they simply know how to do that job better than anyone else. Many Yoruba who are in the business of cattle and other husbandry hire Fulani to help tend their cattle.

The truth now is that the Fulani would not carry their cattle on their heads and simply disappear. Now that the governors have outlawed open grazing, they have to provide an alternative until the herdsmen can have the resources to create ranches or change to other means of earning their living. Old ranches owned by the states can also be resuscitated to give temporary relief to the herdsmen. A reasonable timeline should be agreed upon in dialogue with the herdsmen when open grazing must end in each of the states. It should not be an open-ended law like the Federal Government’s directive on gas flaring.

There is also the practical problem of the rogue herdsmen who have left the business of cattle herding for something more profitable like kidnapping. We all know that not all kidnappers, murderers, bandits, ritual killers, rapists and terrorists are Fulani, but many Fulani is said to be in these trades. The governors have not expressly stated it, but it is a practical thing that the right to self-defence is a fundamental right recognised by the Constitution and the Universal Declaration of Human Rights. Every community, especially in the more troubled states like Ondo and Edo in the South and Kaduna, Zamfara, Benue and Plateau in the North, should be empowered to take practical steps to defend itself. This is not new. After the Civil War, many communities were encouraged by the state governments to set up vigilante groups to stem the tide of armed robberies. It worked then. It will work now.

One thing that is curious is the apparent reluctance (or is it inability) of the various states to prosecute kidnappers and others suspects in their custody. We hear of arrests. We hear of rescue operations. But we don’t hear of prosecution and punishment. With all the heat generated in Benue State for example, how many suspects have been successfully prosecuted? While the police may have been helping in the arrest of suspects, the prosecution is in the purview of the state. If there is a crime, there should be punishment. It is the prosecution and punishment of these suspected criminals that would give the citizens confidence that the governors are not playing politics with security.