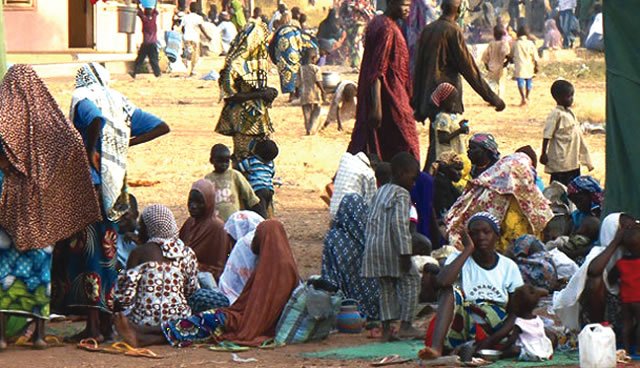 Northeast Development Commission on Wednesday inaugurated the construction of 500 housing projects in Adamawa, amidst protests by victims of insurgency who condemned the location of 300 units 250 kilometers away from insurgency-ravaged communities.

Governor Ahmadu Fintiri had inaugurated the construction of the 500 housing units in Yola South, a suburb of the state capital.

Simeon Kwaghe, who lamented the siting of 300 units of the housing units a few kilometres away from the state capital, which is far flung from the epicenter of the insurgency, described the intervention as travesty of justice for victims.

Managing Director of NEDC, Mohammed Alkali, had said, “300 houses would be built in the state capital because of influx of IDPs to urban area. The remaining 200 units would be distributed to appropriate local government areas,” he said.

However, some of the protesters who were prevented from disrupting the inauguration, disagreed with reasons advanced by the commission over the planned construction of 300 housing units in Yola South.

They argued that the only connection Yola South had with victims of insurgency was the IDP camp located in Malkohi. At the moment, no fewer than 1,500 refugees are in that camp and the government had contemplated closing it.

The protesters also claimed that no single house was destroyed by Boko Haram in Yola-South or anywhere near the state capital.

“Why are they building houses for IDPs near the state capital and not in any of the seven frontline council areas of Madagali, Gombi, Maiha, Mubi North, Mubi South and Hong Local Government? they asked.

That the location of the 300 housing units close to the foot of Sebore hills attracted sharp criticisms of residents who claimed that the area was unsafe and waterlogged. They alleged further that their major concern was that the hill was den to notorious kidnap gang terrorising the state.

In 2014, insurgents overrun seven frontline councils of Madagali, Gombi, Maiha, Mubi North, Mubi South and Hong Local Government, resulting in the displacement of more than 600,000 persons, some of who fled the attacks by crossing into neighbouring Cameroun Republic.