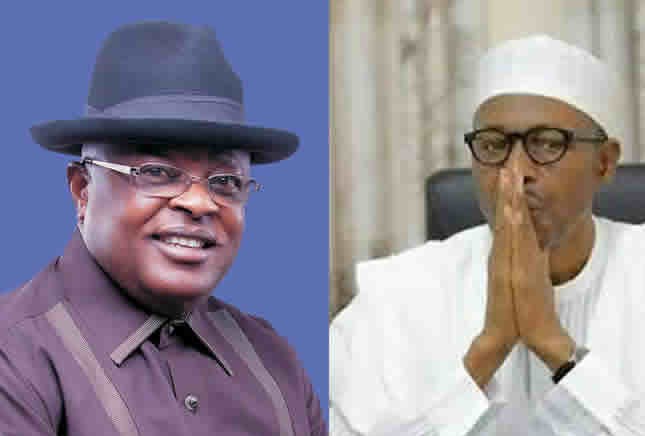 THE Ebonyi State Chapter of the Peoples Democratic Party and the All Progressives Congress -led administration in the state, are engaged in a war of words over Governor David Umahi’s request of N10 billion from the President Muhammadu Buhari to complete the Ebonyi International Airport.

While the PDP accused the State Government of deliberately embarking on construction projects that had little or no direct bearing on the lives of the citizenry, the state government sees things differently.

Umahi had in a letter addressed to the Minister of Aviation, Sen. Hadi Sirika, appealed to Buhari to assist the state with the sum of N10bn for the acquisition of some equipment to complete the ongoing airport project.

The letter dated September 7, 2021 and signed by the governor, was said to have leaked in transit.

But the opposition PDP, in a statement signed by its Publicity Secretary, Silas Onu, said, “The core content of the said letter simply expose the obvious fact that Ebonyi State is unfortunate to have a government that acts as if on impulse, but deliberately for self-enrichment of top government officials and their family members at the expense of the entire state.

“In the letter, the governor appealed to the President for financial rescue regarding the much talked about Ebonyi airport, with a clear commitment to relinquish same project to the Federal Government.

“One question comes to mind at this point: Is the Ebonyi State government selling off the airport to the Federal government at the rate of N10billon? This is the only defensible rationale for such an act which has now become a norm in Ebonyi State.

“This government deliberately embarks on massive construction projects that has little or no direct bearing on the lives and livelihoods of our people with an initial false reason for commencing such a project.”

In response, the state government in a statement signed by Governor Umahi’s Special Assistant on Media and Publicity, Mr Francis Nwaze, said, “First, there is absolutely nothing wrong with the Ebonyi State Government asking for assistance from the Federal Government to finance a megaproject like the airport.

“This is because airports of Ebonyi quality and sophistication are gargantuan projects that require coordinated financing, otherwise, every State of the Federation would have afforded to have their airports.”