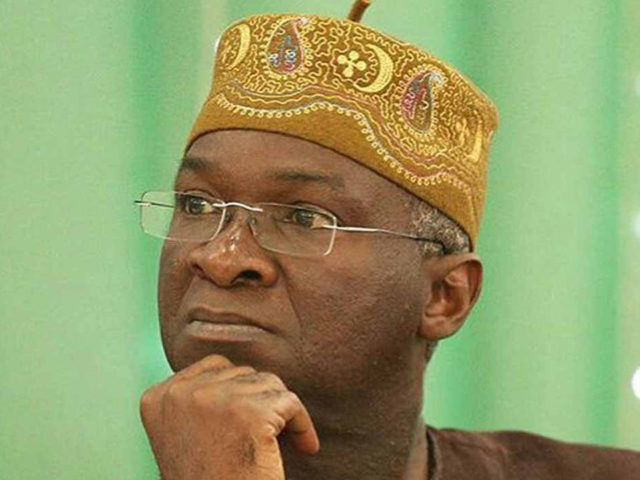 The House of Representatives has called on the Minister of Works and Housing, Mr Babatunde Fashola, to start emergency repairs of the failed portion on the Onitsha-Owerri Expressway.

This followed the adoption of a motion of urgent public importance sponsored by 80 members, mainly from the South East.

The motion was read by Rep Toby Okechukwu, the Deputy Minority leader of the House of Representatives, during the plenary on Wednesday in Abuja.

Okechukwu, stated that the urgent motion was with a view to easing hardship faced by motorists and Nigerians. He noted that a gully had emerged on the Onitsha-Owerri expressway around Oraifite, Ekwusigo Local Government Area, Anambra.

He further noted that the development had cut the expressway into two parts leading to the entrapment of a tanker laden with diesel in the gully.

He said that it took the intervention of the personnel of the Federal Road Safety Corps (FRSC) to ensure that the content of the trapped tanker was trans-loaded.

He added that the remaining portion of the road had remained closed to avoid loss of lives.

He said that the Onitsha–Owerri expressway offered a bypass to several communities in the South-East as well as connected the South-East and South-South geopolitical zones of the country.

He said the present condition of the road made it completely impassable as it posed great hardship to motorists, other road users, host communities and constituted threat to the lives of the people.

He said that the rehabilitation works on the Enugu-Onitsha expressway had been abandoned as evident in the hardship being experienced by motorists and other road users.

He stated that the security situation across the nation could present an opportunity to criminal elements to take undue advantage of the situation.

The House, therefore, called for a full investigation of the ongoing failure of strategic portions of the Enugu-Port Harcourt expressway, while the contractor was still carrying out rehabilitation works.

The House also called for investigations on the abandoned rehabilitation of Enugu-Onitsha expressway which had led to the gory condition of the Amansea section of the expressway.

A News Agency of Nigeria (NAN) correspondent who plied the Enugu – 9th Mile – Opi old and new roads at the weekend reports that the entire stretches are in a very deplorable state.

The situation led to the exploitation of commuters by commercial vehicle operators forcing them to pay exorbitant fares for short trips.