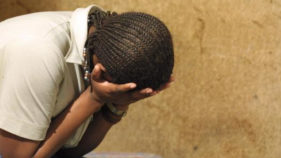 The police charged Onuminya with one count of rape.

Okoi, attached to the State Criminal Investigation Department, FCT Command, made the allegation while being led in evidence by the Prosecution Counsel, Adama Musa.

She said a case of rape was transferred from the Kubwa Divisional Police Headquarters and referred to her department where the defendant was rearrested on November 8, 2019.

“The statement of the complainants, witnesses and the 14-year-old girl were recorded.

“The statement of the defendant was also recorded under caution, in the presence of his elder brother who is a policeman.

“The defendant confessed to committing the crime in his statement and afterward we proceeded to the crime scene where we recovered the exhibits which are the 14-year-old girl’s pants and pink trouser stained with blood,” Okoi said.

She said that the exhibits were tied in a leather bag and she proceeded to the Police hospital where the girl was examined.

“The doctor saw the injuries sustained by the victim and issued a medical report, which was sent to the Kubwa Police Station and forwarded to my station and attached to the case file.

“In the course of investigations, I discovered that the girl fainted on the day she was raped and the defendant confessed that he overpowered her and raped her,” she said.

The defendant’s statement and the blood-stained trousers and underwear were tendered as exhibits in court.

The defence counsel, Abu Adaweno, however, objected to it, saying the defendant’s statement was not voluntarily made, adding that there was no lawyer present. He, therefore, applied for a trial-within-trial .

Justice Kezziah Ogbonnaya adjourned the matter until November 8 for a trial-within-trial.

The News Agency of Nigeria reports that a trial-within-trial is a mini trial within the context of the main trial.

It is a procedure in criminal law wherein the confessional statement of an accused person is subjected to trial scrutiny so as to determine whether or not the statement was freely and voluntarily made by the accused person to the Police.