Minister Dare And Politics Of The Olympics
Bolaji Ogungbemi
August 10, 2021
3:42 am 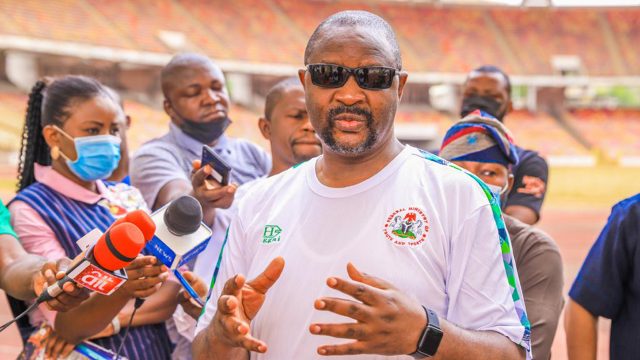 Minister Sunday Dare was lately in the eye of the storm, obviously for the Olympics. He had assumed duties as a minister on the back of an illustrious journalism career, a media entrepreneur, broadcaster, author, public relations manager, and as a public administrator. These trades are service oriented genres, sometimes intangible, but certainly productive in the smoothening of social processes and procedures. They are often empowering enough to hone managerial skills, provide multi-levelled perspectives and a knowledge of social nuances good enough to exemplify a bearer. Dare carried on with that background, adding a scintillating locution, a panache and candor, first tested by the October 2020 EndSARS protests, where as youth minister, he was supposed to be the charge. He largely took charge, did his bit, until the novel protests petered out, just like that; or perhaps, until another day. A second attention to him was with the just concluded Olympics, where he is again the charge of a usually turbulent course, often combustive, for the disparate tempers of partisans, the hope the ministry represents, and the right focus on youths as persons of the future. How do we contextualize the darts towards him, during the games, and now after? How did he fare at the Olympics?

One critic that especially caught my attention was his immediate predecessor, Mr. Solomon Selcap Dalung. He was angry that the minister dissolved Federations ahead of the games, and that preparations were not coterminous with responsibilities. He volunteered these in live television interviews, which eventually got cross and multiple postings. I wished, however, that this former minister who once “spended” all the money given the ministry very well had learnt something about grace and charity. I wish he had also had of Professor Bolaji Akinyemi, an erudite scholar, diplomat per excellence and former minister of foreign affairs, who could easily pass for Nigeria’s own Henry Kissinger, Warren Christopher, or Madeleine Albright, for his feats at the ministry even though he was in charge for just about two years.

Though Akinyemi is retired, he has been a keen watcher of global events, consistent with his callings as a professor emeritus of international relations. With that background, he passes for an authority on global affairs and could as well be a first-rate consultant for successive foreign affairs ministers and governments. With his broadened understanding, he could similarly rip apart some policy directions, if to exemplify his depth and penetrating appreciation of transnational occurrences. He could also do more, including disparaging think-tanks that came after him to prove that his expertise cannot be surpassed. Akinyemi is, however, urbane, epistemic and charitable. Not once has he been asked to comment on his successors performances. On every occasion, he has been circumspect, if at all responding to the questioners, arguing that he has done his part, and the onus is on his successors to do theirs. Reviewing their activities could, therefore, be petty, primitive, and uncultured. And even when such reviews are very necessary, he’ll rather allow others to do it for him. That’s the Prof.

Dalung is not a professor, anyway and may not act professorial, but there are loosely three ways to learning. One, through formal education. Two, personal experiences, and three, the experiences of others. One of these routes should have served Dalung to understand that a public attack on his successor in office is not just infantile, but ludicrous, liminal and heedless. And what is more? Dalung is supposed to be in the same political party as his predecessor. He and Minister Dare, his successor, are believers in the President Mohammadu Buhari school of thought.

Even if these do not make him avoid a public spat with the ministry, how about considering assumptions he is still bitter that he was dropped from the cabinet? And should his bitterness be directed at a man who knows nothing about why he was sacked, despite his high hopes of returning? Ministerial positions are highly respected offices where past and present holders are supposed to be exceptional, whether in their public and private lives. Our man, Dalung, dropped the ball here. He was simply uncharitable, discourteous, and coarse. It should never be a template.

To be continued tomorrow.

Adeniyi, a professor and public affairs analyst, wrote from Abuja.