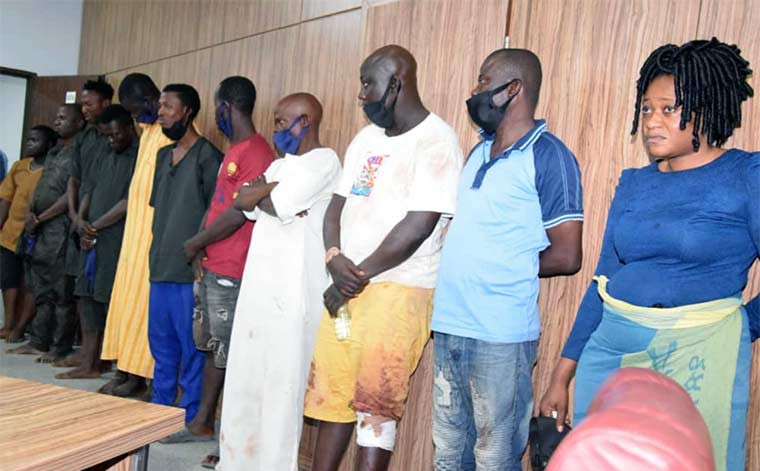 Some of the aides of Yoruba Nation agitator, Sunday Adeyemo, at the Federal High Court, Abuja, on Wednesday. Photo: Olatunji Obasa

LAWYERS for 12 aides of Sunday Adeyemo, popularly known as Sunday Igboho, are currently battling for sureties.

This is the aides who were recently granted bail by the court are still in the custody of the Department of State Services.

The lawyer for detained aides of Igboho, Pelumi Olajengbesi, on Monday said the detained aides, who were granted bail were yet to fulfill the bail conditions and were still in the custody of the DSS.

In an interview with The PUNCH on Monday, Olajengbesi stated that a lot of persons who would have come out as sureties were apprehensive about their lives, posing another difficulty to meet the bail conditions.

He said, “The fund is not an issue here. What the court requires of us is sureties and we are expecting the sureties to step in and get the people released on bail. You don’t pay money for the release of detainees or people who have been granted bail.”

Meanwhile, the Department of State Services has filed an application before the Federal High Court, Abuja, praying the court to cancel the bail granted to four out of the 12 associates of Sunday Adeyemo, popularly known as Sunday Igboho, on August 4.

Earlier reported that Justice Obiora Egwuatu had granted bail to all the 12 aides, although the DSS had opposed the bail of four of them.

In the motion on notice dated August 9, 2021 and filed same day, the DSS is also praying the court to remand the four aides in DSS custody pending their arraignment during the vacation court.

Alternatively, the security agency is also praying the court to vary the bail terms of the four aides.

In the affidavit supporting its application, the DSS asserted that it had earlier opposed the bail granted the four aides as investigations disclosed a high level of complicity on their part in the offence of arms stockpiling and other criminal activities against national security.

“There are credible information at the disposal of the applicants/respondents (DSS) that friends and associates of the above respondents/applicants (Igboho aides) have already commenced moves to compromise ongoing investigation and potential witnesses in the event of possible prosecution,” the affidavit read in part.

The DSS also alleged that the aides have intensified plans to flee to Benin Republic once released from detention.