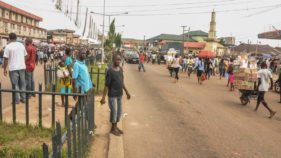 INC sues for peace, urges Obaseki to intervene One person has been reported killed in a communal clash between Benin people and Ijaw settlements of Iko and Ikoro in Obazuwa Community, Ovia North East Council of Edo State.

The deceased, identified as William Amuawosa, was allegedly killed on Saturday, while the oldest man in the community, Pa Agidi Roland, is said to be receiving treatment in an undisclosed hospital from injuries sustained during the alleged attack by their Ijaw neighbours.

A video clip showed some destroyed and burnt buildings, a vehicle and carcases of animals littering the area, as a voice in the background of the recorded clip alleged that the Ijaw neighbours attacked the Iko area of the Obazuwa Community.

“They came in through the waterside with guns and started shooting at people, destroyed and burnt houses.

“They have been disturbing us for long. We want the state government and Federal Government to come to our rescue. They have pursued our people, including elderly ones out of their homes,” the voice claimed.

But reacting to the incident, Chairman of Ijaw Youth Council (IYC) in Olodiama Clan, Samuel Ebiwana, denied the allegations, saying three members of the Ijaw Community were missing.

“The Obazuwa people attacked policemen on duty and destroyed my community. They beat up vigilante members that even helped the polic. After that, they came back with their youths to chase our people to the river.

“We are not aware of what they are saying. We did not attack them. They are the ones that attacked us. As we speak, three of our youths are still missing and we are still searching for them,” he said.

Also reacting, President of the Benin Solidarity Movement (BSM), Curtis Ugbo, condemned the attack on people of the area and called on the state government and security agencies to curtail the situation.

When contacted, the state Police Public Relations Officer (PPRO), Bello Kontongs, said he was yet to receive detailed briefing from the Divisional Police Officer (DPO) of the area and as such, he could not confirm the incident.

In a statement issued, yesterday, in Yenagoa, Bayelsa State by its President, Prof. Benjamin Okaba, the INC appealed to the Governor Godwin Obaseki as the Chief Security Officer of the sate to intervene and restore peace and normalcy to the warring communities.

Okaba said the INC was confident that Obaseki would treat all parties involved in the crisis equally, as citizens of Edo State without bias.