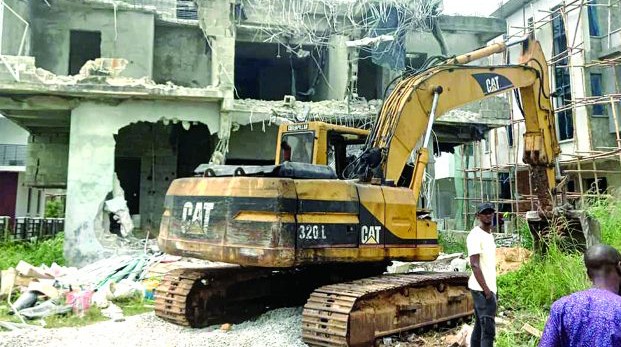 Demolished property. It was a moment of pity for a landlord, Mr. Adebayo Mumuni Shittu, as he watched his two buildings demolished last week in Victory Park Estate, Eti-Osa, Victoria Island, Lagos

The demolition, it was learned, was at the instance of the Asset Management Corporation of Nigeria (AMCON) Mr. Shittu said AMCON’s action on Wednesday, July 28, 2021, was not only contemptuous but also a flagrant abuse of the Court of Appeals’ judgment delivered by Justice Monica Bolna’an Dongban, leading two other judges, including Justice Mudashiru Oniyagi and Justice Jamilu Y. Tukur, on Tuesday, December 15, 2020, in Lagos.

Lamenting that the demolition was against the order of the Court of Appeal, in Lagos, he said the judge forbade the corporation from taking any action on the said properties in Victory Park Estate, in Eti-Osa, Victoria Island, Lagos.

In the judgment, which was sequel to an appeal challenging the ruling of the High Court of Lagos, by Justice Coram K.A. Jose delivered on October 24, 2019, dismissing the Defendant’s, now Appellant’s Notice of Preliminary Objection, the court granted an order of interlocutory injunction in favour of the first and second respondents, Mr. Adebayo Mumuni Shittu and More & S.A. More Limited.

According to the court, its judgment, which was based on the facts leading to the appeal as contained in the appellant’s brief are:

“By a writ of summons and statement of claim dated 6th September 2019, and filed during the lower court’s 2019 annual vacation, the 1st and 2nd respondents (Mr. Adebayo Mumuni Shittu and More & S.A. More Limited), herein instituted an action against the 3rd and 4th respondents only (Knight Rook Limited and Mr Lanre Olaoluwa, respectively).

“That the 1st and 2nd respondents also sought an Order of Interlocutory Injunction against the Defendants at the lower Court. The Appellant is the party with the sole interest in the subject matter of the Suit applied to be joined in the Suit by a Motion dated 16th September 2019, The Appellant was joined by the lower Court on the 17th September 2019.”

According to the judgment, “the cause of action by the Respondents before the trial court, as can be garnered from the record, is on the transaction between the 1st and 2nd Respondents and the 3rd and 4th respondents which principally centres on the sale of land on which the purported residence of the 1st and 2nd respondents stands.

“It is on record that the respondent was said to have been allegedly locked out of his residence.

“It is on the strength of this that the learned trial judge exercised his judicial discretion restraining the 3rd and 4th respondents from any form of further restriction of the 1st and 2nd Respondents from the said house pending the determination of the substantive suit.”

The judgment further stated that “A judicial discretion is said to be a science of understanding to discern between falsity and truth, between a shadow and substance, between equity and colourable glosses and preference, and not to do their wills and private affection.

“Wherefore, judicial discretion has been exercised bona fide as in the appeal at hand uninfluenced by irrelevant considerations and not arbitrarily or illegally by the lower court, the general rule is that an Appeal Court will not ordinarily interfere.”

A visit to the Victory Park Estate on Saturday showed that bulldozers were still at work, demolishing the buildings on the directive of AMCON.

Attempts to speak with the officials proved abortive as the supervisor on-site refused to talk to the press and also declined in giving out the contact of their head/manager for a reaction on the development.