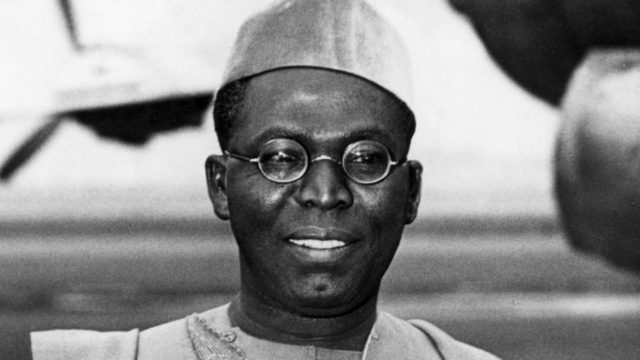 Dear Chief Awolowo, I hope it is not presumptuous of me to ask how you are faring on the ‘Other side? Your response depends on if you are beyond the Pearly gates or closer to warmer regions. I ask because I am at odds with this paradox. Should you be resting in the bosom of Olodumare, can you quietly whisper in His ears this quagmire I am about to explain to you?

Are you wondering what this situation is and what can be worse than our sinking economy? Huge debts? Renewed agitations for secession by the Igbo and fresh ones by the Yoruba? Or that we have lost face at the Olympics? Or Hushpuppi is snitching on a ‘respected’ Nigerian Public servant? I think this takes the cake. In my years on earth, I do not think I have heard a more paradoxical yet ironical statement (I know I am exaggerating but when you are through reading this you will be as confused as I am). Since reading the conflicting article, I have been unable to get it off my mind. It has even prevented me from enjoying the Olympics and Big Brother Nigeria. But I digress.

Nigerians often tag you ‘the best president Nigeria never had’ yet some historical texts put your infamous advice to the Gowon regime led to an economic blockade that claimed the lives of innocent children and women. Am I digressing again? Please forgive me. Your death should absolve you as it did for Abba Kyari. Not the Police one, this is the other one or maybe the third one who can even keep up with these things?

Before your ascension to loftier heights beside the Big guy (you’ve been gone for quite a while o! What do you people do all day up there because it seems to be affecting His responses to our calls o!), you saw Mr. Integrity usurp power from a civilian right? Well, would you believe that over fifteen million Nigerians voted him back to power? Would you believe that he is in liaison with your successor (I mean your ‘Leader of the Yoruba’ successor). As though this was not bad enough, they gave him their vote of confidence a second time.

Kwarupshion Undertaker, either oblivious to the paradoxical irony of his statement or an insensitive attempt to mock us, in London said: A person cannot succeed outside his personal educational qualification and whoever misses education has missed everything.

This is not the first time Mr Principled would make such an ironic statement. Do you remember his first speech after hijacking power from Shagari? He said, ‘The planless downright incompetence and irresponsibility which characterised the current government… The Nigerian Army could not stand idly by while this country was drifting towards a dangerous state of political and economic collapse through the continued ineptitude and insensitiveness of political leaders who were apparently unwilling to change.

Even his first regime cannot be considered as a successful dictatorship, yet he kept touting himself as the messiah Nigeria needed. You would think he’d see the symbolism in his speech then and his administration now but like I said, it is either flying over his head or he mocks us behind his newspaper while eating the finest beef jerky the First kitchens can provide. How can you be the thing you hate so much?

You think that was ridiculous? The same man whose certificate was in contention down to falsified documents and misspelled names stated the importance of education and how one can never move beyond the level of their educational qualification. Such impetus! Can you see what is troubling me yet? If a person can never succeed above their level of educational qualification and he is suspicious, what does that spell of our collective fate? Doom? Destruction?

His leadership saw our debt increase with two major recessions and inflation so high it seems we are reaching for the clouds yet he cannot see the truth in his statement and do the honourable thing. You’d think he would surround himself with professionals right? Do not get me started on the crop of advisers he has surrounded himself with. Did you see the viral video where the former Minister for Health said not every doctor can be a specialist? He was asked what was being done about the mass relocation of doctors out of Nigeria and his response was that after several years of studying, examinations, and training not all of them would practice and some should learn a trade like farming. He added that his tailor was a doctor while wearing his impeccable bespoke attire.

You do not want to get me started on the below poverty line of many Nigerian professors, teachers, doctors, engineers, lawyers, etc. Graduates of higher learning after years of unemployment diversify to menial jobs yet the Integrity General claims one cannot rise above their educational qualifications. What educational qualification did he present before leading the most populous black nation? What qualification did his red-eyed friend in Ikoyi present before being tagged Asiwaju?

Bloomberg in March of this year claims that the unemployment rate in Nigeria is the second highest in the world with 33% as more than half of our labour force is either unemployed or underemployed yet Corruption General makes this statement at a summit in London publicly if I might add.

I wonder if he considers himself a comedian otherwise how does he account for this true yet false (or is it false yet true) statement especially for Nigerians. That one cannot move beyond their educational qualification might be the case for others but not for us as our Integrity Police are proof of the contradiction of this statement.

Bye? P.S. I hope I’m not intruding on your eternal rest? Why should our ancestors rest when their adherents can’t?

Giwa is of the Department of English, University of Lagos.