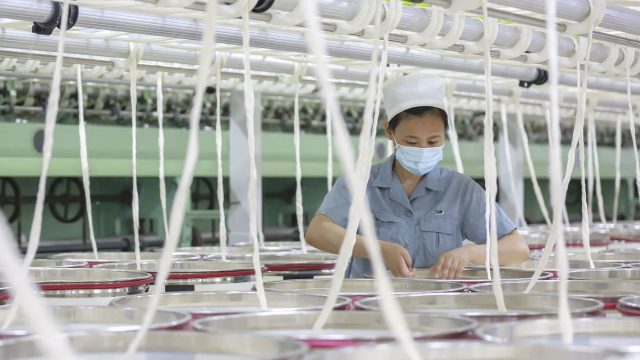 This photo taken on August 7, 2021 shows an employee working at a textile factory in Anqing, in China’s eastern Anhui province. (Photo by STR / AFP) / China OUT

The world’s second-largest economy has largely bounced back from strict coronavirus lockdowns last year but a fresh spike in cases of the highly transmissible Delta variant has raised concerns about the recovery.

That has raised concerns that inflation could spike further if lockdowns in parts of the country cause supply problems.

The producer price index (PPI), which measures the cost of goods at the factory gate, rose to 9.0 percent on-year, the same as May, which was a 13-year high, according to the National Bureau of Statistics.

While the PPI remains elevated, consumer inflation ticked down to 1.0 percent, with officials stressing their work to stabilise prices in the wake of recent disasters including floods in central China and with companies appearing to absorb the increases instead of passing them on to consumers.

The slight fall in the consumer price index (CPI), a key gauge of retail inflation, came on the back of easing food prices as pork prices fell 43.5 percent on-year, supported by China’s pork reserves and rising supplies.

This was even as “extreme weather such as typhoons and heavy rainfall in some areas” bumped up the cost of fresh vegetable production, storage and transportation.