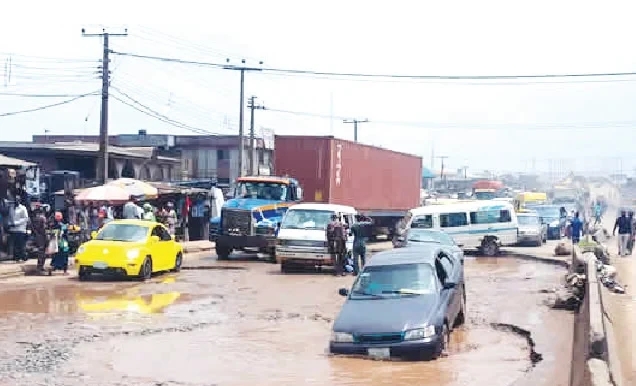 Members of Osborne Foreshore Residents Association, Estate II, Ikoyi, Lagos State, have cried out over recurrent flooding in the environment and its gradual damage to the road on the estate.

They blamed the situation on the canal blockade allegedly caused by some houses built by Lekki Gardens Estate Limited.

The residents accused the company of building excess high-rise structures on the estate they described as a low density area meant for a small number of housing units.

The dwellers expressed their grievances during a protest on Saturday at the estate gate, calling on the state government to carry out unbiased investigation into the matter.

The Chairperson of the estate, Chinwe Ezenwa-Mbah, claimed that the company had built 84 housing units on the estate as against 28 units approved for construction, adding that it did not put in place proper sewage system.

She said, “We are to protest against the sacred cow Lagos State has made some people. Lekki Gardens is overbuilding on our estate and we are saying no to that. When they were given approval for smaller units, they went ahead and built so many units in a low-density estate. The Commissioner for Physical Planning came here on a Thursday and sealed up the buildings.

“By Saturday, he came back with a representative of Lekki Gardens and opened up all the seals. When we confronted him, he said he did that so that they would scale down (the structures). Instead of scaling down, they continued building. Now, they have 84 units.

“Our infrastructure is deteriorating. Lekki Gardens has blocked our canal. The canal is not within the approval of the land they own. For two years now, we have been begging Lagos State Government to tell them to open up the canal so that when it rains water can flow into the lagoon. When it rains, our estate is flooded.”

A resident, Hector Etomi, said the environment was becoming unsafe due to the alleged overbuilding, noting that it could have far-reaching effects in future of not checked by the government.

He said, “Floods affect us adversely. When it rains, we cannot go out. The rains keep on destroying the road. The heavy equipment they bring also contributes to the destruction of the road. The government should come to our aid. There should be no overbuilding. There are laws and regulations in this country. Nobody should be a sacred cow.”

The vice chairman of the association, Rasaq Adele-Adewole, said a Federal High Court sitting in the state had on July 9, 2021 granted an application asking the court to restrain the company from embarking on further construction on the estate but it did not comply.

He added, “We were invited to a meeting with the Lekki Gardens Management by the AIG Zone 2 last week. The recommendation of the AIG was that whatever the court has pronounced, both sides should abide by it.”

However, the company had earlier in a statement said it had “promptly filed an application before the same Federal High Court judge to vacate the order obtained by OSFRA.”

It also said a Lagos High Court on July 1, 2020, granted its application that the status quo should be maintained.

Responding to the issues raised by the residents on Saturday, the Lekki Gardens management said they were amused at “the antics of OSFRA in playing up emotions and muddling up the issues.”

The company in a statement by its Public Relations Consultant, Bolaji Abimbola, said it had approvals for projects on the estate, stating that evidence was with the Lagos State Ministry of Town Planning and Urban Development.

The statement read in part, “Lekki Gardens has not been going beyond its approval which is why the Lagos State Government and the ministry have allowed it to carry on with its projects after and despite several reviews based on the baseless petitions by OSFRA. The association does not have the legal authority to demand the submission and further review of approval given by the Lagos State Government.

“We would expect OSFRA to desist from playing to the gallery in the media and rather test the authenticity of its positions in a competent court of law while resisting the urge to resort habitually to aggressive self-help tactics.

“We are confident that Lagos State is not run that flippantly and the relevant authorities will not hearken to this sort of emotional blackmail and thereby discourage legitimate private sector investments in the state.”

Several calls made by our correspondent to the mobile of Commissioner for Physical Planning and Urban Development, Dr Idris Salako, indicated that his line was busy. He had also yet to reply to a text message seeking the government’s stand on the matter as of press time.