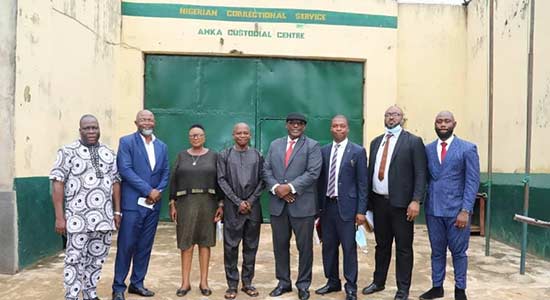 This is sequel to the promise made by Chief J-K Gadzama, SAN at the Eastern Bar Forum held on the 24th July, 2021 at the Hon. justice A.I Umezulike Auditorium, Enugu on the Emmanuel Orji’s case.

The Learned Silk arrived at Awka Correctional Center, in company of NBA Chairman Awka Branch, Mr. Ken Nwanna, and Mr. C. I Meze (counsel) had in-depth knowledge of the case for a further investigation of the alleged inmate who has been in the prison for 15years without a proper trial.

He was welcomed by the Welfare officer Awka Correctional Center, Mrs. Maria Kwazu, who ushered J-K Gadzama, SAN, and company into the office of the Deputy Controller of Corrections and Welfare, Mr Harry Okonkwo.

A report is being prepared by J-K Gadzama, SAN to be submitted to the President of the NBA, the Eastern Bar Forum, and Senator Enyinnaya Abaribe on Monday, 9th August, 2021 which will be made public.