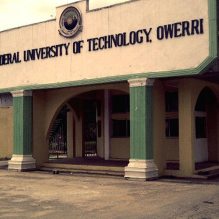 Host communities of the Federal University of Technology, Owerri (FUTO), Imo State, have renewed their agitation for excision and compensation of their over 1,000 hectares of land acquired by government for the institution, 38 years ago.

Speaking at the weekend, in Owerri, on behalf of the 11 host communities in Owerri West Local Council, the communities’ attorney (not a lawyer, but an Estate Surveyor/ Valuer), Chief Sam Anokam, reacted to comments made by Governor Hope Uzodimma, days ago, when he visited the institution, and declared that the state government was committed to ensuring the institution had its land intact, while warning land grabbers to steer clear.

He sought dialogue and adequate compensation. He said the institution had no need for such large expanse of land, maintaining that in the last 38 years, only insignificant portion was used, others lying fallow, while the communities were left without land to build.

He said the proposed medical institution for FUTO should be built outside Port Harcourt Road, on the outskirts, to decongest the area.

“The governor should get FUTO to sign a Memorandum of Understanding (MoU) to resolve the issue and compensate the host communities. The matter is not just on the surface.”

Uzodimma, who interfaced with the new Vice Chancellor, Prof. Nnenna Oti, and other principal officers of the university, pledged to ensure the land the state government acquired and handed to the institution was kept, adding that the proposed medical institution was constructed unhindered.

Anokam said the communities were satisfied with Federal Government’s move to resolve the dispute. He urged that its resolution be hastened.