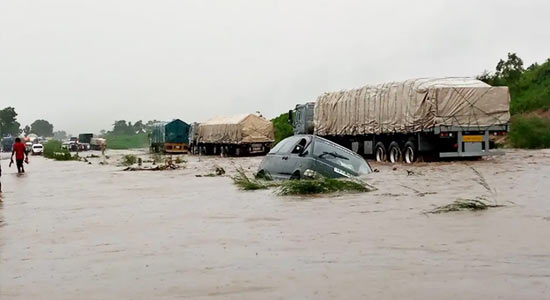 Hundreds of travellers on the Abuja-Lokoja-Okene highway were yesterday left stranded after parts of the road were submerged by flood caused by a four-hour rainfall.

One of the areas affected was between Kwali and Abaji.

About three buses were swept off the busy highway.

Many vehicles from Abuja could not proceed to Lokoja, Okene and the southern parts.

Among those stranded was the Senator from Kogi West District, Sen. Smart Adeyemi.

Adeyemi said: “The flood was devastating. I witnessed how some vehicles were swept away from the highway.

” I and many travellers can no longer continue with our journey. We have become stranded. There is no other way than to turn back to Abuja.”

Another passenger, Hadiza Abdulkareem said: “We have waited for 45 minutes for the flood to subside.

“I think the relevant agencies should sustain the warning enlightenment to travellers in this rainy season.”

According to eyewitnesses, about three buses were swept off the busy highway with many passengers trapped.

Idris, while reacting to the development, told our correspondent that The FCT Emergency Management Agency (FEMA) had advised FCT residents to prepare for the rainy season and avoid environmental practices that could lead to flooding.

The DG stated that preparedness and sensitization remained key towards reducing disasters in the FCT.

He appealed to residents to desist from acts, such as indiscriminate waste disposal into water channels and rivers, building on waterways and riverbanks as well as diverting water channels.

Idris disclosed that the FCT Minister, Muhammad Bello has received the report of the incident, adding that he is on top of the situation.

His words: “Our own is coordination which we have given the proper coordination. We have called them for a workshop on the review of the response planner so that everybody should be up and doing. And we have given the early warning to all the stakeholders that there is going to be mass flooding.

“Everyone is a stakeholder in this disaster prevention efforts and FEMA has created a high-level awareness amongst residents through several media platforms to establish the consciousness of disaster prevention and mitigation, rather than management.

“I am sure something is going to be done because the minister is on top of the situation. We have given him the report and it won’t happen again. Even if it is going to happen it will be less.”