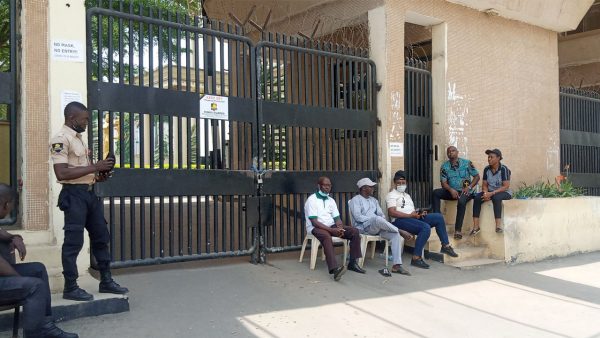 Chief Justice of Nigeria (CJN), Justice Ibrahim Muhammad Tanko, is currently in a closed-door meeting with leaders of the Judiciary Staff Union of Nigeria (JUSUN) over the union’s ongoing nationwide strike.

Chief Justice of Nigeria (CJN), Justice Ibrahim Muhammad, is currently in a closed-door meeting with leaders of the Judiciary Staff Union of Nigeria (JUSUN) over the union’s ongoing nationwide strike.

Some members of the union, who pleaded anonymity because they were not authorised to speak to the press, told the Guardian that the meeting between the CJN and leaders of JUSUN, which began at 10.am, was taking place at the Supreme Court complex.

The workers began an indefinite nationwide strike on Tuesday, shutting down the Federal High Court, Court of appeal and Supreme Court complexes in Abuja.

When The Guardian visited the courts at 11. am staff, lawyers and judges were not allowed into the court’s premises.

As at time of filing this report, some of the union members were still seen stationed at the gates of the courts to enforce the strike action.

JUSUN had issued a statement last week, directing its members nationwide to begin an indefinite strike on April 6, 2021, “until the government complies with the provisions of the Constitution and other instruments which confer or re-emphasise the financial autonomy of the Judiciary”.

The union stated that it had at its last National Executive meeting on March 13, 2021, in Abuja, issued a 21-day ultimatum to the government to implement the financial autonomy of the judiciary with a threat that “failure of which JUSUN will have no other option but to resume the suspended national strike action.”