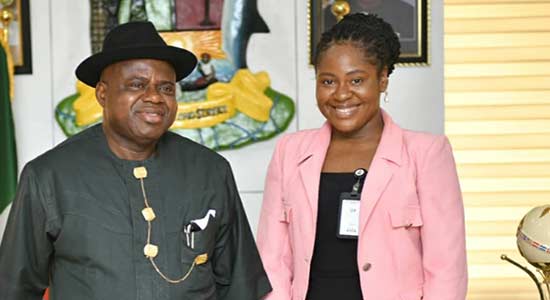 Miss Amazige, who graduated from the Rivers State University in Port Harcourt, is the second female Law graduate to bag the scholarship after Miss Ebizi Eradiri that had a double First Class at the Niger Delta University and the Nigerian Law School.

Diri made the offer yesterday while receiving Miss Amazige and her mother, Mrs Joy Amazige, in Government House, Yenagoa.

The governor, who assured her of his administration’s preparedness to sponsor her education up to doctorate level in any university of her choice within and outside the country, congratulated her for achieving the feat against all odds.

In a statement by his Chief Press Secretary, Mr. Daniel Alabrah, the governor saluted Amazige’s courage and resilience, pointing out that she was not deterred from achieving her dreams by her father’s death.

“You have a lot of offers in the United Kingdom to go for your Master degree. Let me on behalf of the government declare that your admission in or outside the country will be taken over by the state government even up to Ph.D level.

“I use this opportunity to advise our young ones not to be discouraged by the circumstances they find themselves. Esther lost her father while in secondary school. Nothing can stop you when you are determined to achieve your dreams.

“Let Esther be your role model. With all the daunting challenges she and her mother faced, she remained focused and today we are celebrating her success. I urge the youths to learn from her success story.

He charged Miss Amazige to continue to be of good conduct and ambassador of the state and the country.

In his introductory remarks, the Attorney General and Commissioner for Justice, Mr. Biriyai Dambo (SAN), described Miss Amazige as an intelligent and promising young girl, who bagged First Class in 2018 but narrowly missed replicating it at the Nigeria Law School.

In her remarks, Miss Amazige expressed gratitude to the governor for the opportunity to advance her education, saying her academic success was in fulfillment of her determination to make her late father proud.

She said she already had five admission offers for a Master programme abroad and promised to fly the flag of the state and the country high at all times.

He appreciated the awardees for positively promoting the image of Bayelsa at their places of primary assignment during their service year.

He noted that their feat was proof that given the opportunity and right environment, the youths of the state can compete favourably with their peers anywhere in the world.

He noted that the feat would spur other Bayelsa youths to excel.