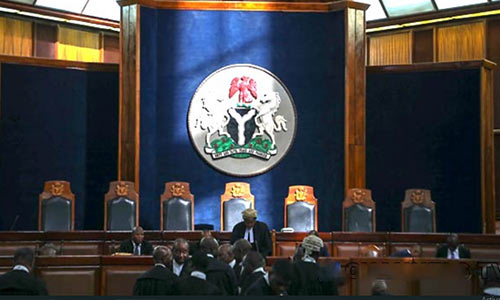 Something of interest to the nation’s jurisprudence emerged from the valedictory speech of retired Supreme Court Justice, Olabode Rhodes-Vivour. Justice Rhodes-Vivour who just retired after the mandatory 70 years of age, had drawn attention to the existence of several outdated Supreme Court judgments he said should no longer be followed

He cited the doctrine of ‘precedence or stare decisis’ meaning “stand by your decisions and the decisions of your predecessors, however wrong they are and whatever injustices they inflict”. The retired Justice said “precedents that no longer make sense anymore or are outdated should be laid to rest and never followed”.

Implicit in this, is the reality that many of the decisions of the nation’s apex court are encumbered by precedents of questionable value. That is really something to worry given the primacy of the judiciary in protecting and safeguarding the rights of citizens from executive and legislative meddlesomeness.

As fundamental to the overall dispensation of justice the issue is, it remains curious why justices still rely on stale precedents that are no longer of value in the dispensation of justice? Why are they seemingly slaves to moribund rules that end up inflicting injustice on litigants? Is man made for rules or rules made for man?

It is good a thing the retired justice alerted the public on the incalculable harm undiluted reliance on questionable precedence has wrought on our justice system. Even as his overall aim is to expand the frontiers of jurisprudence, it is somewhat sad Justice Rhodes-Vivour chose his valedictory session to draw attention to this mortal danger. The timing of his advice conveys the impression that either he raised the issue for his successors to handle or just wanted to be heard.

It appears now a fad for retiring justices to raise weighty and fundamental issues impeding quick and efficient dispensation of justice on the eve of their exit. But the question that crops up each time we are treated to such scenes is why wait till retirement before raising debilitating hiccups in the temple of justice?

It would have served greater public good for justices to raise such issues and find solutions to them while on the bench. What manner of justice is served when justices stand on wrong decisions and moribund precedents that manifestly inflict injustice on one of the parties? Or, are we contending with the concept of justice espoused in Plato’s Republic by Thrasymachus as the ‘interest of the stronger party’. Maybe also the Marxian perspective that views the judiciary as part of the superstructure that exist to serve the interests of the ruling class can fill in the gap created by this philosophical inquisition.

The impression one gets is that justices are helpless and slaves to rules. That should not be the situation. They are neither helpless nor slaves to rules unless they chose to be so. There is a whole lot they can do to remedy blind adherence to outdated precedents in cases brought before them. Law and justice are dynamic processes that must constantly adjust to the dictates of the ever-changing environment.

The danger in outdated precedents is brought closer home by events of the last governorship election petition in Imo State between Hope Uzodinma of the All Progressives’ Congress APC and Emeka Ihedioha of the Peoples Democratic Party PDP. The case had run successfully in favor of Ihedioha at both the tribunal and Court of Appeal. But the Supreme Court upturned all that and declared Uzodinma winner based on its admission of results from the contentious 388 polling units which he claimed were excluded by INEC from the total votes credited to him.

The court noted that results from the cancelled polling units amounted to 213,295 votes and admitted them as lawful votes. It further directed the addition of the unlawfully cancelled votes it said were due to Uzodinma and declared him winner of the Imo governorship election.

That would denote a clear case of over voting which cannot confer electoral advantage on any of the candidates. But the apex court awarded victory to the APC candidate irrespective of the questionable manner the figures were generated, without indicating the scores of other parties to the election. The Supreme Court ruling elevated a candidate who came fourth in that election to the first position. It was one ruling many could not come to terms with till now.

Based on this error, Ihedioha filed for a review of the apex court’s ruling. He asked the court to reverse its earlier decision based on factual error and to better serve the course of justice.

The Supreme Court led by the Chief Justice of Nigeria CJN, Tanko Mohammed held that it lacked the powers to sit on appeal on its own judgment. That is the anachronism embedded in the principle of stare decisis which Rhodes-Vivour canvassed as he took a bow from the bench. But the issue is not as difficult as has been presented by the CJN. The apex court is not entirely helpless as it would goad us to believe. It can really reverse itself to mitigate the injustices of its wrong decisions or blind adherence to precedents.

This fact was eminently canvassed in a minority judgment by Justice Centus Nweze who held the “apex court has the power to overrule itself and has done so in the past. The court has powers to overrule itself and revisit any decision not in accordance with justice”. The jurist said Uzodinma mischievously misled the court into unjust conclusion with the unverified votes credited to him in the disputed 388 polling units without indicating the votes polled by other political parties.

The decision of the Supreme Court in the Imo governorship election is wrong and “will continue to haunt our (Nigeria’s) electoral jurisprudence for a long time to come” he declared. This is a landmark ruling that rubbished the vexatious notion that the Supreme Court cannot reverse itself. So, there must be other reasons for the controversial judgment than the touted encumbrances of judicial precedence.

The apex court was on sound ground to reverse itself but it chose the other way for inexplicable reasons. And that judgment has continued to haunt not just jurisprudence but the sanctity of the electoral process as the lynchpin of the democratic option.

True to prediction, the ruling has continued to reverberate. There is a petition before the Supreme Court arising from its reaffirmation of Uzodinma as the duly elected governor of Imo State. In its ruling in December, 2019 on the APC governorship primary in Imo State, the apex court held that Uche Nwosu was the authentic candidate of the party. But Nwosu eventually ran the election under the platform of Action Alliance, AA. Based on double nomination, the apex court in a post-election petition judgment, nullified Nwosu’s nomination as both the candidate of the APC and AA. That left the APC with no candidate in that election.

But here we are with Uzodinma holding sway as the governor of Imo State when there is nowhere in the electoral law provision was made for independent candidacy. The suit now before the apex court is to interpret and enforce its ruling on the authentic candidate of the APC in that election. Again, for reasons that remain suspicious, more than six months after the suit was instituted, it is yet to be slated for hearing.

These are the monsters we create. The problem has little to do with outdated precedents. It revolves around the disposition of our judicial officers to ensure the course of justice is served. They are largely to blame. But this case has shown that justice is yet to be served. The sooner all issues revolving around it are resolved, the better for the integrity of the judicial process.