Vanguard For The Independence Of The Judiciary Condemns Excesses Of Magistrates
Editor
March 27, 2021
1:39 pm 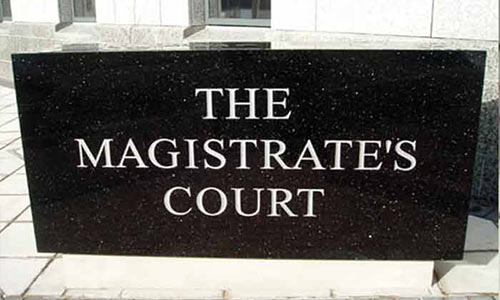 *Calls For Re-Orientation Of The Magistracy Nationwide By The National Judicial Institute, Says No Bar, No Bench.

The Group in a statement on Saturday morning issued in Benin City by its President, Douglas Ogbankwa Esq and National Legal Adviser, Augustine Ike Esq., condemned the overbearing attitude in court of some magistrates and called on the National Judicial Institute, the body saddled with the training and re-training of judicial officers to provide a platform for re-orientation of the magistracy all across Nigeria.

The Statement Reads in Part, thus:

“The Vanguard for the Independence of the (V4IJ), condemns the avoidable resort to naked judicial power by a Magistrate in the FCT, despite entreaties from members of the Bar present, over an altercation with a lawyer, for which His Worship sent the lawyer to Prison. It takes two to tango and it is foolhardy for one to say the lawyer was unruly without being prompted by the magistrate.

The Vanguard also condemns the issuance of a bench warrant for a lawyer in Enugu, because the lawyer did not appear in court. Power is nothing without control and the relationship between the Bar and the Bench is one of the chickens and the egg, as one comes before the other. You cannot have a chicken before an egg. Judges and magistrates should not forget that they are still lawyers,who were recommended by the Bar to the Bench. To this end, judges are expected to treat lawyers with the utmost respect, with patience and subdued temperament, which is however covered by the doctrine of reciprocity.

The Minnesota Bar Association Special Committee in the United States on the Appointment of Judges stated thus on the characteristics of a Judicial Officer:

A candidate should exhibit the following aspects of proper judicial temperament: Patience, open-mindedness, courtesy, tact, courage, punctuality, firmness, understanding, compassion, humility and common sense. Those qualities should be demonstrated consistently. For applicants who already hold a judgeship, these qualities should have consistently manifested themselves to all the court’s “stakeholders” interacting with the judge regardless of station in life, profession, type of case, representation by counsel or lack thereof

Nigerian judicial officers should imbibe the qualities indicated above to forestall avoidable face off with members of the Bar. Without the Bar, there will be no Bench!

We also call on our colleagues to treat judicial officers with utmost respect and honour as it is not a favour owed, but a duty incumbent on the lawyer by the Rules of Professional Conduct for Legal Practitioners in Nigeria. This respect and honour is however reciprocal.

The Bar and the Bench are one, we may be separate, but we are equal. Judicial officers are therefore Primus Interpares – First among equals.

Let us stay in harmony and face our common enemy, which is the political class that do not want to loose their grip on the judiciary, despite the unambiguous provisions of section 121(3) of the Constitution of the Federal Republic Nigerian,1999 (As Amended) by the 4th alteration, which provides for financial autonomy for the judiciary at all levels of Government”.