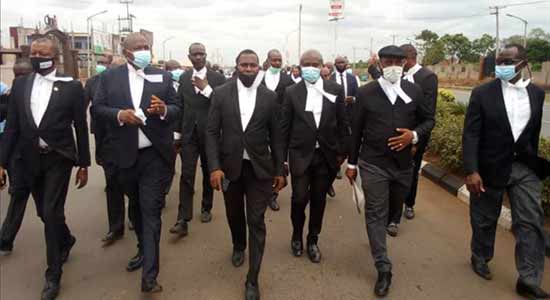 …say to Obiano, ‘enough is enough’

Lawyers in Anambra on Monday protested at the Government House in the capital Awka to call for insecurity to be addressed, after a member of the Nigerian Bar Association, Frank Onwuachi, was killed by unidentified gunmen.

The lawyers, under the aegis of the Committee of chairman and secretaries of NBA, called on Governor Willie Obiano to immediately address worsening insecurity in the state.

Speaking during the protest, the chairman of Onitsha NBA, Onyechi Ononye, said lawyers in the state could no longer go to court due to high rate of security challenges in the state.

“Our member was kidnapped and killed the other day by unknown gunmen. Some security formations were attacked and operatives were killed while their weapons were carted away.

“We cannot travel to court because of challenging security situation, it is getting worse every day.”

Responding on behalf of the state governor, the Secretary to the State Government, Solo Chukwulobelu said that what had happened in the last one week was a wake-up call to all in the state.

“Security is everyone’s business, you in the NBA, the various communities in the state, let us join hands together and fight it.

Security is not just the government business alone, everybody must do something to ensuring a good security network in the state is improved,” he said.

He also disclosed that a joint security task force has moved into action to ensure that such deadly acts do not occur again, adding that the community vigilante groups, as well as leaders of town unions, have been briefed on what do.