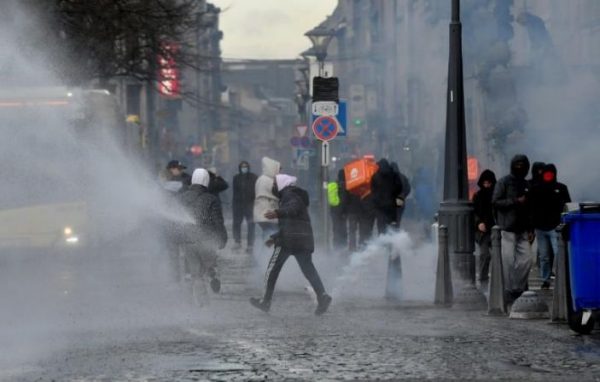 Belgian police said Sunday they arrested around 10 people from among 200-300 looters who clashed with police on the fringes of a Black Lives Matters protest in Liege.

A total of 36 officers were injured during Saturday’s clashes, one of whom was still being treated in hospital, said Liege police chief Christian Beaupere.

The violence happened on the fringes of a demonstration called to protest an incident on Monday in Liege, when officers arrested a woman of Congolese origin for “rebellion”.

Officers were working to identify other members of the group that looted and vandalised shops in the city centre, Beaupere added, speaking at a news conference beside city mayor Willy Demeyer.

Beaupere stressed the organised nature of the looting and the violence the offenders had unleashed.

Those arrested came not just from the eastern city of Liege and its outskirts, but from the capital Brussels.

Most of those detained were between 20 and 30 years of age, but there was also one minor, he added.

He said he and Beaupere would be attending a meeting Friday with members of the city’s sub-Saharan community, to try to build bridges.

The woman arrested Monday has filed an official complaint accusing the police of violence and racism, a charge the force has rejected, saying she had resisted arrest.

Video footage of the incident shows two officers pinning her to the ground as others prevent members of the public from intervening.