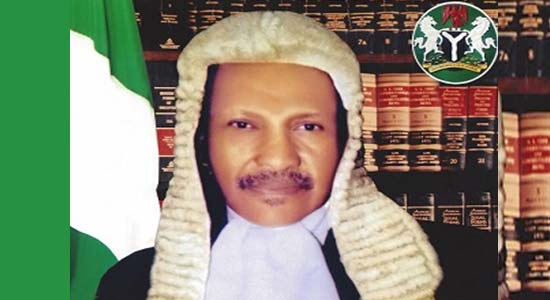 The Chief Justice of Nigeria, Hon Justice Dr Ibrahim Tanko Muhammad, CFR is inviting the public to a Valedictory Session of the Supreme Court of Nigeria in Honour of Honourable Justice Bode Rhodes-Vivour, JSC.

In a programme of event lined up for her retirement, a special valedictory court session/ reception in honour of the retiring Justice will hold on Monday 22nd March 2021.

The invitation card made available to ASKLEGALPALACE shows that the valedictory session is slated as follows:

Hon. Justice Olabode Rhodes-Vivour was born to the family of Mr and Mrs Akinwunmi Rhodes-vivour in 1951, in Lagos Island. He obtained his First School Leaving Certificate in 1963.

He went on to attend St Gregory’s College, Obalende, Lagos, where he obtained his West African Examination Council (WAEC) Certificate in 1968, and the Higher School Certificate (HSC) in 1970, before proceeding to University of Lagos where he graduated in 1974 with an LLB Honors.

Hon Justice Olabode Rhodes-Vivour was appointed to the bench as a Judge of the High Court of Justice, Lagos State, on 18th February, 1994. His distinct attributes of service led to his elevation to the Appeal Court on 25th April, 2005.

Hon. Justice Olabode Rhodes-Vivour has attended various International and Professional conferences within and outside the country. He is a recipient of many notable awards amongst which are –

Commander of the Federal Republic of Nigeria (CFR 2012).

His hobbies are reading, watching sports, movies and documentaries. He is married to Mrs Adedoyin Rhodes-Vivour and they are blessed with (3) three children.