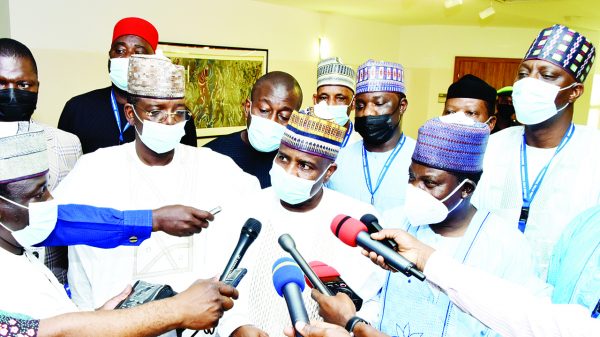 Governors of the 36 states of the country have thrown their weight behind financial autonomy for state legislators and the state judiciary.

Governor of Sokoto State, Aminu Waziri Tambuwal, who spoke to newsmen after he led the Chairman of States Legislators Conference, Abubakar Suleiman, to meet with the Chief of Staff to the President, Prof. Ibrahim Gambari at the Presidential Villa, Abuja, gave the assurance that modalities for the implementation of the financial autonomy would be concluded on Thursday next week.

Tambuwal was accompanied by Governor Simon Lalong of Plateau State, who was one-time speaker of the state House of Assembly, and his Zamfara State counterpart, Bello Matawalle.

Speaking on why the delegation was at the State House, Tambuwal, who was a former Speaker of the House of Representatives, said the meeting was at the instance of President Muhammadu Buhari.

“We are here to meet the Chief of Staff on the instruction of Mr. President and you can see that the leadership of the Speakers Conference of the States of the Federation is here, ably led by the Chairman.

“It’s all about Order 10, which has to do with the independence, financial autonomy of the legislature and the judiciary at the state level.

“So, it’s a continuous meeting, and we are going to meet next week Thursday when we hope to finalise on the framework and modalities of implementing the autonomy of the state legislature and the judiciary.”

Recall that the governors had come under criticism for allegedly frustrating efforts to grant financial autonomy to state legislators and state judiciary.

However, Tambuwal said that the governors were in support of financial autonomy for the state lawmakers, adding that there was no impediment towards the implementation of the President’s Executive Order.

“By next week Thursday, we will be meeting to finalise the framework.  We are all in support of it by the grace of God,” he said.

On the controversy trailing the implementation of the N30,000 minimum wage, he said: “Well our Chairman (Chairman, Nigeria’s Governors Forum) and the team of governors forum are meeting with Labour. I don’t want to preempt that meeting, please. The business of governors is to ensure that there is harmony in the country.”

President Buhari had on May 23, 2020, signed an Executive Order granting the state legislature and the state judiciary financial independence from the executive.

Buhari’s action was predicated on the power vested in him as the President of the country under Section 5 of the 1999 Constitution (as Amended).

The new Executive Order provides that, “the Accountant-General of the Federation shall by this order and any other such orders, regulations or guidelines as may be issued by the Attorney-General of the Federation and Minister of Justice, authorise the deduction from source in the course of Federation Accounts Allocation from the money allocated to any state of the federation that fails to release allocation meant for the state legislature and state judiciary in line with the financial autonomy guaranteed by Section 121(3) of the Constitution of the Federal Republic of Nigeria 1999.”