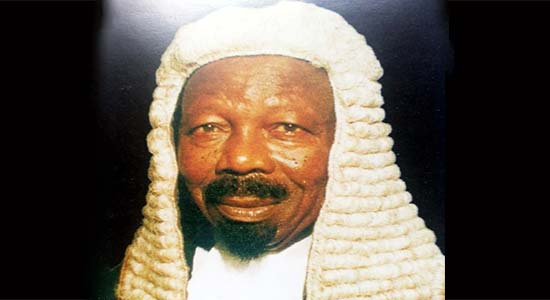 The Board of Senior Advocate of Nigeria (BOSAN) Secretariat has announced the demise of their colleague, the first Nigerian Emeritus professor of law; Emeritus Professor David Ijalaye SAN who died yesterday, 11th day of March, 2021.

The statement which was signed by the Board secretary; Seyi Sowemimo, SAN, made available to ASKLEGALPALACE partly stated that

“The late Emeritus Professor David Ijalaye SAN was born on the 8th of April, 1932 (89 years old), and was called into the English and Nigerian Bar respectively in 1963 and 1964.

“He attended Hull University where he obtained his Bachelor of Laws and won the prize for the best overall performance. He was the Dean, Faculty of Law, the University of Ife from 1974-1978 and became the first Nigerian

Emeritus Professor of Law. He was appointed Attorney General and Commissioner of Justice, old Ondo State from 1984 -1987 and was also appointed member, Nigerian Constitution Review Committee from 1987 – 1988 and member, Body of Benchers from 1984 – 1987.

“He was the Deputy Vice-Chancellor and Chairman, Board of Postgraduate Studies, Obafemi Awolowo University and fellow of the Nigerian Institute of Advanced Legal Studies; Fellow, Nigerian Society of International Law and

Nigerian Representative, International Bioethics Committee, UNESCO. He was also a member of, Constituent Assembly from 1988-1989 and earned the award of Distinguished Professor of Law by the Nigerian Universities Commission.

In 2006, he was conferred with the rank of Senior Advocate of Nigeria (SAN).

And Emeritus Professor David Ijalaye SAN is survived by his children, grandchildren and great grand-children.

The secretary of the board, Seyi Sowemimo, SAN further added that “Further information on the funeral arrangements of our departed colleague will be communicated as soon as we receive the details from the family.

“May the soul of Emeritus Professor David Ijalaye SAN and the souls of other faithful departed Rest in Peace. Amen.