Compensation: Tell ExxonMobil to comply with Supreme Court judgment in respect of our entitlements, ex-workers pray FG
Editor
March 9, 2021
6:04 am 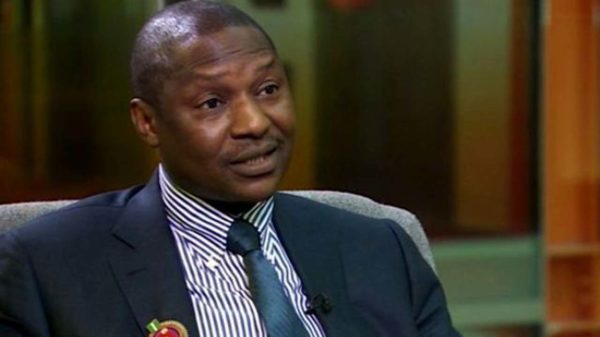 Former security employees of ExxonMobil have called on the Federal Government and the Attorney General of the Federation (AGF), Abubakar Malami (SAN) to direct the oil giant to pay their exit entitlements as contained in the judgment of Nigeria’s Supreme Court delivered April 20, 2018.

The 21 ex-workers, in a statement signed on their behalf by Mr. Emmanuel Usoro and Mr. Tabiti Kehinde at the weekend, said ExxonMobil has been very reluctant to comply with the verdict of the apex court until the affected ex-staffs staged a peaceful protest on the company’s premises, prompting it to carry out documentations and commenced payment.

They regretted that the company unceremoniously stopped payment, leaving 21 of them unpaid, thereby denying them the fruit of their legal victory.

The aggrieved ex-workers said when they contacted the company’s headquarters in Victoria Island, Lagos, they were informed that every one of them would be paid and that they should be patient.

“The question is how long shall we be patient? We are tired of being patient since 2018 when most of us worked for ExxonMobil all our lives and have no other means of survival. No pension and no gratuity.

“We served as Supernumerary Police Officers with ExxonMobil Police Unit in various capacities during our youthful ages. Our primary assignment was to protect life and properties in the Loss Prevention and Control (Security) department of the Multinational Oil Company, which we did with all youthful vigor, zeal and enthusiasm that the onus of the service demanded and placed on us, not minding the risk, threat, even death of some of our colleagues.

“Yet, we were not deterred by the hatred, scorn and under dog treatment to which we were subjected during the course of performing our duties in ExxonMobil over the years,” the group lamented.

According to the ex-workers, some of them were forcefully disengaged from the service against their wish and without notice or any form of benefits. The hatred and inhuman treatment, they claimed, persisted to the extent that they had no choice than to seek redress in court.

The statement reads in part: “We engaged the services of Mr. Femi Falana (SAN), who filed a suit in court to pursue our claims. The matter was a protracted legal battle for years but finally, in the first quarter of 2018, the Supreme Court of Nigeria delivered judgment in our favour.

“The judgment asserts that all personnel that served in that unit, dead or alive, must be accorded with all the rights in accordance to ExxonMobil employees status. However, ExxonMobil refused to comply with the judgment until they were pressurised.

“Reluctantly, the management of ExxonMobil commenced the payment of these benefits in October 2018 and categorized the payment system into three stages, namely; active service (those that were in service when the judgment was delivered); the retirees (those that were forcefully or willingly retired) but alive and those retired but dead.

“All personnel in the first category, a large number of others in the second stage, and selected few in the third stage were paid, thereby making nonsense of the payment categorisation.

“We are dying of hunger and sickness especially in the recent COVID-19 pandemic, where the economic situation has deteriorated to unbearable levels.”

The group insisted that Exxonmobil has no basis for refusing, hesitating or delaying to pay them their benefits after they had served the company and are entitled to the benefits, which the Supreme Court have affirmed.

They warned that they would resort to all legal means to get their entitlements, including picketing of the offices of the defendant if he continues to disobey the apex court decision.